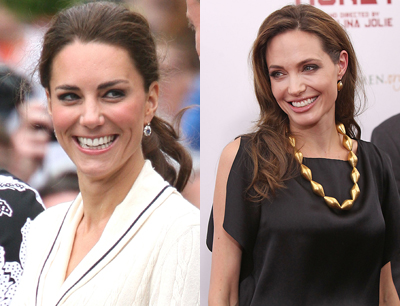 Sometimes, it seems like the whole world is obsessed with Brangelina and the British royals, so it makes sense that the two celebrity phenomenons might be fascinated with each other!

According to OK! Magazine, Duchess Kate Middleton is a big fan of Angelina Jolie and is trying to model her life in the spotlight after the Oscar-winning actress.

“Kate adores how Angelina’s always so graceful and elegant and makes everything look so effortless,” said a source to the tabloid.

And while Kate is expected to get pregnant soon and produce an heir to the throne, she and Prince William reportedly haven’t ruled out adopting a child, either.

“She has always said how much she’d like to adopt a couple of kids, just like Angelina. She and Wills think it would be a really modern thing to do.“

In addition to her simple style and penchant for philanthropy, Kate, who shed over 16 pounds for her wedding and is said to be 5’11” and weigh a mere 120 pounds, has also supposedly cut down her food intake even more to get closer to Angelina’s stick-thin frame.

“Kate now has the build of a supermodel and can’t believe she’s giving her hero, Angelina, a run for her money on the red carpet.“

We hope that Kate doesn’t lose too much weight in her quest, especially considering that Angelina reportedly hovers somewhere around 100 pounds. The world is expecting a royal baby in 2012, and that is going to be hard for Kate to do without gaining some weight!