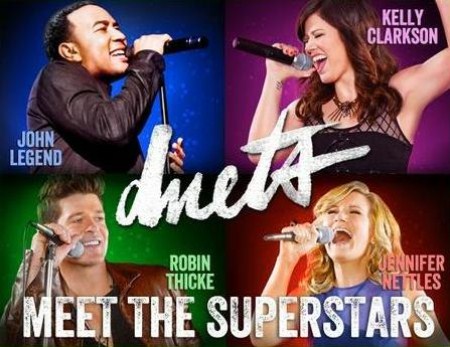 Tonight on ABC is an all new episode of DUETS. On tonight’s show the theme is “Songs from the 2000’s” so we can expect a lot of singing and dancing. If you missed last week’s show, we have a full and detailed recap here for you.

On last week’s show it was “Movie Night” theme and the contestants battled it out to some awesome movie soundtracks. The “stand out” performance last week was Jennifer Nettles & J Rome when they performed “I will Always Love You” from The Body Guard. Kelly thought it was is so good and felt J Rome had no reason to be nervous. Robin really felt that J Rome was in love with Jennifer and thinks his career is just unstoppable. John thought the performance was beautiful. J Rome pushed to the number one spot on the Duet’s Chart and stayed there.

On tonight’s show, superstars Kelly Clarkson, John Legend, Jennifer Nettles and Robin Thicke take the stage with their remaining Duet partners and perform their favorite songs from the millennium, this is the first live episode and viewers get to finally vote. America will have the opportunity each week now to decide who will continue on in the competition by voting by phone, at ABC.com or Facebook. After each live episode, the Duet amateur who receives the lowest number of votes will be eliminated on the next live episode until we are down to one remaining amateur and their Duet celebrity partner, when the winner of Duets will be crowned.

Stay tuned for our live coverage of the show tonight for the awesome “Songs from the 2000’s” theme at 9:00 PM EST! Meanwhile, while you wait, hit the comments and let us know what you think of Season 1 of “Duets” so far!

RECAP: Our four Duet celebrities open the show singing “freedom” and I tell you that there are two noticeably very hot superstars on the  stage; Kelly with the blond hair looks amazing and Robin in sunglasses and some sexy scruff, wow!

Tonight the show is live and they will be bringing us songs from the last decade.

The first ever live performance is from Jennifer Nettles and John Glosson perform, “When You Say You Love Me” from Josh Grobin.

Superstar comments: Kelly loves him every time and is not shocked that he did a good job. Robin thought it was a perfect song for him. John loved how magnificent his voice was, but he wasn’t crazy about how “syrupy” the song was.

Superstar Comments: John love that they choose a country sung. Kelly thought she was pretty pitchy throughout the song, but loved the song choice. Jennifer thought she looked like a million bucks and did a wonderful job.

Superstar Comments:  Jennifer loved it, she thought he was so cute and so much fun. Robin on the other hand couldn’t take his eyes off Kelly. John loved how much fun he had, but feel like when he dances it’s not completely natural.

Superstar Comments: Robin liked it, he found it was much better towards the end. Jennifer thought it was wonderful, but a little pitchy, she still loved the song choice. Kelly loved it, great song choice.

Jennifer Nettles and J Rome perform, “Without You” by Usher and David Guetta.

Superstar Comments: John loved the professional performance but he thought that this was one of his weaker performances. Robin loves him, but he loved watching Jennifer, it was enjoyable. Kelly thought it was so ridiculous and can’t wait to go to his concert one day.

That’s it for tonight, time to vote America! Sound off your comments and tell us who you think had the best performance of the night.