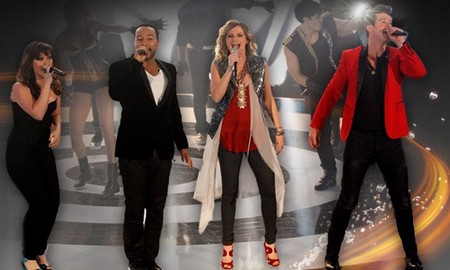 Tonight is the season premiere of ABC’s new talent competition DUETS.  American Idol winner Kelly Clarkson returns to television with the new series and we are really excited to see how she does.  Stand by as we live blog the premiere with all the up-to-the-minute details.  Remember Celeb Dirty Laundry is your ‘one stop’ spot for all television and reality television, recaps and news.

The new talent show promises there will be no cheesy chairs that turn around or no judges hiding behind a desk sipping on Pepsi.  Duets has a unique twist which distinguishes it from other popular singing competitions. Each week, rather than just mentoring the contestants, the celebrity experts (which include country artist Jennifer Nettles, R ‘n’ B singer Robin Thicke and John Legend will perform alongside them to help secure them a Hollywood Records contract; a label that released music for the likes of Queen, Miley Cyrus and Selena Gomez.

This may be all new for ABC because they have never had a successful singing competition having failed not once, but twice with “The One” and “Karoake Battle USA”. The real question here is, does Duets have enough to beat out “American Idol”, “The X Factor” and “The Voice.”

In “Duets”, the four judges will search America for new and undiscovered talent worthy to be their proteges. Each Superstar will pick two hopefuls to be their duet partners. Together, they will take the stage every week to perform for a live audience.

Only one duet will be the ultimate winner at the top of the charts and the protege will win a recording contract with Hollywood Records.

We will be live blogging the season premiere of Duets tonight from 8PM – 10PM.  So don’t forget to come back to this spot for all the up-to-the-minutes details.  Don’t forget to refresh often to get the most current info!

RECAP: Robin Thicke, John Legend, Kelly Clarkson and Jennifer Nettles open the show singing, “Take Me”; once they are done, they go sit in the “super star lounge”. Quddus is now on stage and tells us this is just a taste of what we are going to see in the weeks to come.

Kelly Clarkson used her concerts as a platform to find contestants, Robin Thicke went back to his gospel roots, Jennifer Nettles went around the country but found someone in her own backyard and John Legend was looking for someone with a voice as smooth as his own; the superstars could only choose two amateurs.

On the road, Jennifer is trying to narrow it down and when J Rome walks in the room, she is sold.

Jennifer is singing with her first Duets partner, J Rome singing Sugarland’s song, “Tonight”. The first performance of the night and it was great. It’s time to score J Rome, the judges that did not sing secretly score 1-100 on performance and 1-100 on presentation.

Superstar Comments: Kelly loved the way they blended together, Robin thinks he is handsome and has a beautiful voice, John says he is really phenomenal and sounds like a star

Quddus announces that after the judges scores, J Rome is number 1. We kind of knew that since he is the only to have performed, duh.

John is now searching for his contestant and when Johnny Gray auditions, he knows that he has his guy. The two are on stage for their Duet and they are singing, “Ordinary People” by John Legend. That was really soulful.

Superstar Comments: Robin thinks Johnny has the same emotion when he sings this song, like John. Kelly loved his vulnerability, she thinks it is sexy. Jennifer loves his low end, it was warm like honey and he connected with the song.

Quddus announces that after the judges scores, Johnny is second on the charts – but the good news, nobody is getting voted out tonight.

It’s time for Robin to choose his contestant and he is auditioning them in a renowned recording studio where Sammy Davis Jr., and other celebrities have recorded in. Chemistry is the most important thing for Robin, he chooses Olivia Chisholm.

Robin is on stage singing with Olivia Chisholm, they are singing, “Lost Without You” by Robin Thicke.

Superstar Comments: John loves how sexy she sounded, it was suttle and sexy. Kelly also loved how sexy she was. Jennifer loved her singing.

Quddus announces that after the judges scores, Olvia is third on the charts.

Kelly is auditioning while she is on the road and decides to make Julianna and Jason perform on stage in front of her 6,000 fans to help her decide who she is going to pick. It’s a tough decision for Kelly, but she has to choose one.

Kelly chooses Jason Farol, he is on stage singing a Duet with her, “Breaking Your Own Heart” by Kelly Clarkson.

Superstar Comments: Jennifer loved it, fantastic. Robin thinks he is adorable and loves him. John loves how much it shows that Jason wants to be here for this opportunity.

Quddus announces that after the judges scores, Jason is fourth on the charts.

John is on the search for his second contestant and he chooses Bridget Carrington, they are stage for their Duet and are singing, “Tonight (Best You Ever Had)”.

Superstar Comments: Robin says this song makes him want to go to a club. Jennifer feels like she wants to go home to her man, such sophistication, she owned the song and the stage. Kelly thought it was hot and sexy and wants to do a Duet with john right now.

Quddos announces that after the judges scores, Bridget pushes up on the charts.

Jennifer is at an awards gala for Clovers and Co. looking for her next contestant, John Glosson. Jennifer is on stage with John performing their Duet, “Stay”.

Superstar Comments: Kelly thought he sounded like an angel. John loved the beautiful high voice, he blended with Jennifer so well. Robin said he is singing with a beast, you hold your own which is a true testament to your talent.

Quddos announces that after the judges scores, John pushes to number three on the charts.

Robin is at Trinity Baptist Church searching for his next contestant, he wants a gospel singer. Robin is on stage singing his Duet with the contestant he choose, Alexis Foster, they are singing, “Magic”.

Superstar Comments: Kelly loved it and thought her voice was beautiful. John loved her voice, it was awesome, Jennider thought it was fantastic, the crowd love it.

Quddos announces that after the judges scores, Alexis pushes to number three on the charts, pushing John out of the position.

Kelly is looking for her final contestant and this time it is at home, she is finished her tour. Kelly finds the girl that vocally blends the best with her, Jordan Meredith and they are singing their Duet, “What Doesn’t Kill You (Stronger)”.

Superstar Comments: John said Kelly did a great job finding someone who matched her tone. Jennifer agrees, it was great. Robin loves her syle, he hair and her voice.

Quddos announces that after the judges scores, Jordan is number seven on the charts.

Kelly is looking for her final contestant and this time it is at home, she is finished her tour. Kelly finds the girl that vocally blends the best with her, Jordan Meredith and they are singing their Duet, “What Doesn’t Kill You (Stronger)”.

Superstar Comments: John said Kelly did a great job finding someone who matched her tone. Jennifer agrees, it was great. Robin loves her syle, he hair and her voice.

Quddos announces that after the judges scores, Jordan is number seven on the charts.

That’s it for tonight, how did you enjoy the first episode of Duets? Sound off your comments below and tells us if this new singing competition ranks up there with “The Voice” and “American Idol”.