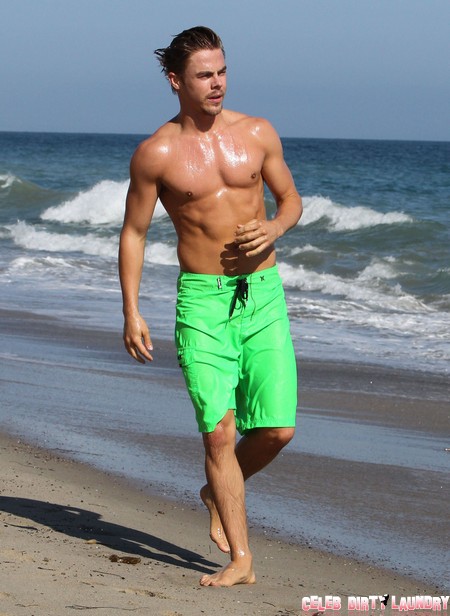 DWTS Derek Hough and his sister, Julianne Hough (Ryan Seacrest’s GF), look like those kids from The Village of the Damned. They’re weirdly hot and are still able to maintain a presence of “I make love on nail beds”. Derek was spotted at a very popular Salt Lake City gay club where he donned silver pants (tee-hee!) and shook his ass on the dance floor like Beyonce. A fan approached him and attempted to take a picture, but the blonde haired mannequin freaked out like our grandma when she realizes that her bread is actually cardboard.

The 27-year-old professional dancer and star of Dancing with the Wannabe’s – Oh sorry, we meant stars – has been plagued by gay rumors for many years, despite having had a slew of relationships with females. Derek has also been allegedly “involved” with opera pop star Katherine Jenkins, but she was breaking chandeliers when he showed up at Jam (the gay nightclub).

Ken Lee, a regular at Jam, told The Enquirer, “I’m a big fan of Derek’s, and I have always thought or hoped he was gay. Seeing him shimmying with his buddies at the gay club wearing skintight shiny silver pants just made my mind scream!” Wait, hold the gay pride parade and the stereotypes, what the hell is this man on about?

Ken allegedly approached Derek for a photo, but he became “all nervous and fidgety and stammered, ‘No, no, no – not here!’”

Ken says, “I was really careful about approaching him respectfully. I went up to Derek and said, ‘excuse me’ and asked very nicely if I could have a photo taken with him. Well, he couldn’t have been more rude or a bigger diva. I was like, okay, he’s clearly not comfortable about having his picture taken in a gay bar. If you’re not gay, then what’s the problem? Derek’s behavior was very suspect.”

We dare not ask, but we have to, why does Derek go to a gay bar and refuse a picture? He knows he is a well-known face and he knows he will be approached by fans. Why the sudden refusal? Dude, it’s not like being spotted at a gay club would destroy your reputation or further fuel the rumors. If you’re so comfortable with your sexuality, why become a nose flipping diva at the sight of a camera and a drooling gay man fan? Why not give him the time of day?

Ken continues, “Derek very well may not be gay, but he sure was dressed pretty and threw an impressive hissy fit when I asked for a photo!”

What do you think readers? Is this a terrible rumor, or is there some fact to the story? Let us know in the comments below.