BY Dr. Jody Overland on May 3, 2012 | Comments: one comment
Related : Andy Warhol, Celebrities 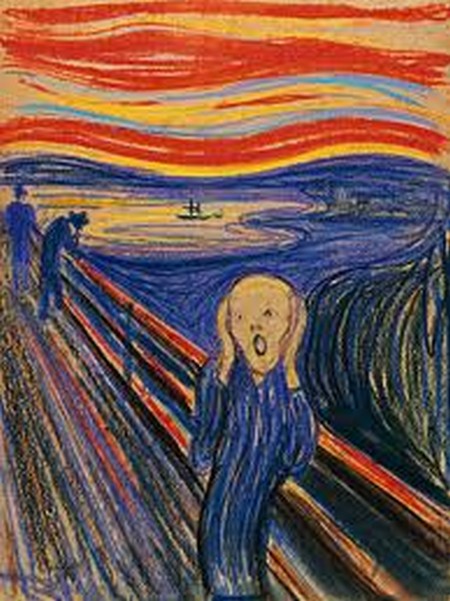 One of the worlds’s most recognizable paintings – Edvard Munch’s “The Scream”- was auctioned off for $119.9 million dollars at Sotheby’s today.  This is highest nominal price ever paid for a painting. The familiar image of a man screaming and holding his head under a blood streaked sky was one of four different versions by Munch.  It was the only one left remaining in private hands, until today that is.

The popular image has been “used by everyone from Warhol to Hollywood to cartoons to teacups and T-shirts,” said Michael Frahm of the London-based art advisory service firm Frahm Ltd.  “Together with the Mona Lisa, it’s the most famous and recognized image in art history,” says Frahm.

Sotheby’s said that this was the only version of the painting, whose frame was hand-painted by the artist to include his poem, detailing the work’s inspiration.  In that poem Munch told that he was “shivering with anxiety” and said he felt “the great scream in nature.”

The previous record for an artwork sold at auction was $106.5 million for Picasso’s “Nude, Green Leaves, and Bust,” which was sold by Christie’s back in 2010.

The director of the National Museum in Oslo, Audun Eckhoff, says Norwegian authorities approved the Munch sale because the other versions of the composition are in Norwegian museums. Proceeds from Wednesday’s sale will go to help establish a new museum, art center and hotel in Norway.