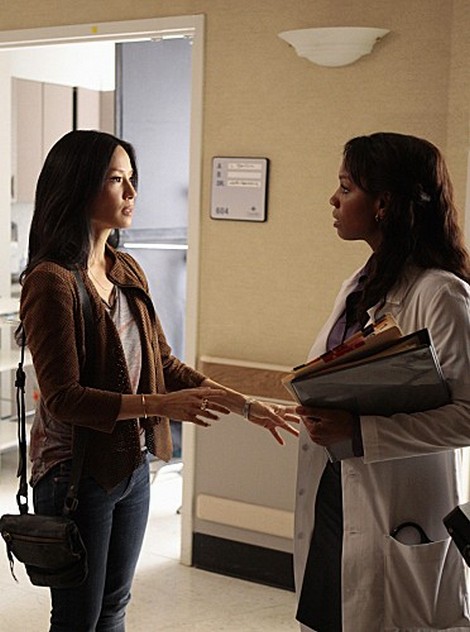 Tonight on CBS a whole new episode of ELEMENTARY airs called ‘Lesser Evils.”  If you have never watched the show before Elementary stars Jonny Lee Miller as detective Sherlock Holmes and Lucy Liu as Dr. Joan Watson in a modern-day drama about a crime-solving duo that cracks the NYPD’s most impossible cases.

Following his fall from grace in London and a stint in rehab, eccentric Sherlock escapes to Manhattan where his wealthy father forces him to live with his worst nightmare – a sober companion, Dr. Watson. A successful surgeon until she lost a patient and her license three years ago, Watson views her current job as another opportunity to help people, as well as paying a penance.

On tonight’s show while doing research in a hospital morgue, Sherlock stumbles upon a series of murders that he believes have been committed by an angel of death.

Sherlock tries to determine who has been killing weak and terminal patients at a hospital, making it look like they died of natural causes. Meanwhile, Sherlock learns more about Joan’s decision to walk away from her surgical career.

Tonight’s episode is going to be another exciting one and you won’t want to miss it, so be sure to tune in for our live coverage of the show tonight at 10 PM EST! While you wait for our recap hit the comments and let us know what you think of “Elementary” season 1 so far! Also we have a sneak peek video of “Conflicting Conflict” below!

Tonight’s recap:  We open with Sherlock straddling and choking a man. Turns out he’s staging a little criminal reenactment. He’s working with corpses, experimenting on different modes of death. Watson isn’t happy about all the death and reminds Sherlock they have Met tickets they can’t abandon.

In a very Sherlock moment, he notices one of the corpses is telling him a different story than the toe tag says. The patient died from a heart attack, but the genius sees it as foul play and after a brief investigation of the hospital room, he and Watson are in agreement that it’s foul play. The game is afoot!

Is it just me or does Sherlock remind you of a younger, sexier, faster talking Dr. House? It’s like he’s diagnosing crime instead of illness and rather than having a crippled leg, he’s crippled by his drug addiction… What do you think?

Watson and Sherlock lock themselves in the patient’s room and are trying to figure out how he was administered the lethal dose of epinephrine. Security is pounding on the door, but he doesn’t want them in contaminating the crime scene.

Watson runs into a doctor she knows and she introduces them. Sherlock sniffs out that they’ve had a falling out, but they won’t tell him why.

The hospital administrator and head of surgery tell Sherlock he can’t have the man’s name or information because of HIPAA laws. He’s outraged and stomps out of the hospital. They head out for the coffee shop that they found empty logo cups for in the room. They also find a receipt with Dave’s name on it.

Sherlock describes her lipstick and Dave instantly recalls her as a busty blonde. He thought she was a doctor because she had a lab coat under her jacket. She was also heavily perfumed and made up, so the conclude she wasn’t a doctor, but worked at a fancy makeup counter.

The woman tells them Trent didn’t have any other friends but that there was a doctor – not his – who would come by at night and talk to him about the cancer. She tells them that Trent had only a few months to live.

Sherlock focuses in on Trent’s breakfast which featured neatly cut up pancakes – he believed it indicted a certain kind of killer. Watson catches on and asks if he’s thinking it’s an angel of death. Sherlock is thinking exactly that and says that type of killer is prolific – they need to catch him before he kills again!

The head of surgery doesn’t think it’s possible that they have an angel of death. Sherlock tells him he needs access to records of patient deaths. He asks why Sherlock came to him and he says he knows he doesn’t like the administrator. The doc agrees to get him the records and says he can threaten a press conference.

Sherlock and Watson get their records. Watson wants to help since she has medical expertise. They conclude that the angel needed a source of epinephrine. The find only two instances where it went missing from the pharmacy. Watson says the crash carts carry it and they find nine instances where he may have killed with cardiac arrest.

They have 23 suspects based on the dates and timecards of those who were working. Sherlock goes to start his investigation and Watson heads off for coffee with her frenemy. Sherlock starts his suspect interviews with the head of surgery himself. He tells him three of the nine patients were his and the doc isn’t flummoxed. He said many of his patients are terminally ill anyway.

Sherlock talks his past failures with experimental procedures and that he’s on probation currently. He accuses him of playing God. He tells him he can’t be the angel of death because they’re mercy killings and he’s largely indifferent. Sherlock says it’s a “novel alibi.” Doc also provides him with an alibi for the most recent killing.

Carrie asks her about the angel of death investigation. Hmm. Wonder if it might be her. Hope not. She drags Watson along on a surgery consult. It’s a young soccer playing girl who’s torn her knee. Watson seems distracted by the girl’s toes.

The interviews are straggling along. The doctor they’re chatting with is tired and frustrated. He didn’t even realize they were looking for a murderer. They let him go.

Watson tells Carrie she noticed a symptom of endocarditis. Carrie says she checked the girl’s heart, but Watson insists she check her again lest she dies on the OR table.

After the interviews, Sherlock presses Watson on her friend Carrie. Watson gets a text from Carrie saying the girl’s heart checked out, but Sherlock encourages her to press on.

Sherlock noticed one of the suspect’s cars still in the hospital parking lot hours after he should have been gone. They head back in to find him. Sure enough he’s sneaking a syringe. Sherlock has hospital security grab him – looks like case closed – but no! He wasn’t getting ready to inject the patient with anything – he had an empty syringe to steal morphine from a patient’s dispenser. They didn’t catch the angel, but did catch a junkie doctor!

Watson finds an anomaly among the deaths – a patient that wasn’t dying, but was in recovery. They need to figure out why the angel made an exception. Meanwhile the druggie doc is singing like a canary at the police station. He was hiding out in the bathroom shooting up drugs he’d stolen from one of the angel’s victims (while still alive).

He overheard them talking, but didn’t recognize the voice. He did say he could tell they’d been chatting frequently about his condition prior to his death.

Watson pushed Carrie to run an additional test because the other test is not definitive. Her friend pushes back and refuses to run the test before the surgery. Sherlock thinks he’s made a breakthrough. He spots two different signatures on a test form.

They determine that one of the patients spoke only Ukrainian so they are looking for a Russian. They didn’t find any doctors, but the janitor Sherlock threw out of the murder room is Ukrainian! And back in mother Russia he was a doctor.

He asks why he’s been called in and they show him the photos of the victims. He tells them that when people are dying and in pain, it’s not murder but a release. They show him the log they found at his apartment with medical notes on all the patients. He tells Sherlock and the Captain that he freed them from the horror of dying and that he showed them mercy.

Sherlock asked him about the one woman who was getting better. He tells her she had metastasized cancer and was dying. He tells Sherlock that he’s lying. He’s arrested, but Sherlock is flummoxed about the anomaly case.

Sherlock doesn’t like that the angel was convinced the outlier patient was dying. Hmm. The game is apparently still afoot!

Watson asks if Sherlock wants sushi and he rattles off a list of illnesses you can get from raw fish. There’s a ring at the door and it’s Carrie. She said she found them from the morgue guy. Carrie’s come by to tell her that the lab found the endocarditis from the test that she didn’t order – but someone else had written in the file.

Sherlock tells her Watson was clever to change the girl’s chart to save her life. This gives Sherlock an idea. They call the head of surgery down to the police station about the anomaly case. Sherlock accuses him of knowing about the angel of death and overlooking it. The captain said they checked the morgue logs and saw that he visited two of his patients that had been killed by the angel.

Sherlock accuses him of leaving a clamp in the anomaly case and says he would have lost his license if it had been found out. He says he reduced her pain meds so she’d be hurting and added information to her chart indicating she had terminal cancer. The captain tells him they exhumed the body and found the clamp.

Sherlock says he went back to the angel and asked him how he took such extensive notes without attracting attention. The angel had taken photos of the files so he could work on his notes at home. They have photographic evidence of the changes he made to the victim’s file.

Watching TV, Watson and Sherlock see the head of surgery hauled away in cuffs. Sherlock tells Watson he enjoyed seeing her in her element at the hospital. He tells her he thinks she must have been a good doctor and shouldn’t have given it up.

Up in her room, Watson is looking at photos of herself at the hospital with her doctor and nurse friends. She smiles sadly and then deletes all the photos. Is she entirely giving up on medicine for good? She mentioned to Sherlock that she’s let her medical license expire even though her suspension over the death of a patient was temporary. She told both him and Carrie that she was done with medicine.

But based on this episode, it doesn’t look like medicine is through with her. Great case. I really liked the red herring druggie and that there were two perpetrators rather than just one. This show takes such interesting twists and turns!