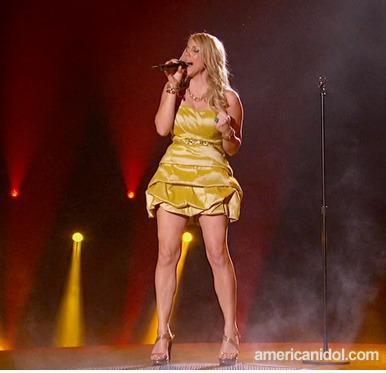 Elise Testone performed ‘No One’’ by Alicia Keys tonight on American Idol the Top 7.  It is the same group as last week after the judges saved Jessica Sanchez with their only save last week.  This week each contestant will be on the American Idol stage twice, the theme for this week is Now and Then.  We are getting awfully close, can you imagine how much stress the contestants are feeling?

Elise Testone maybe feeling like the underdog, according to Jimmy who also thinks she doesn’t have a massive fan base so she needs to be great week to week and cannot afford to slip at all. Elise is singing, “No One” by Alicia Keys.

Judges Comments: Steven said, “I loves your voice but I was wishing you would have picked a different song, it was still delicious.” Jennifer said, “We push others to do what you do so naturally, I got my first goosies of the night. When you smile and sing your eyes come alive, it’s like a light bulb.” Randy said, “You have a strong voice, I think you sang it well and stayed with the melody because this song sings itself, I think you were very good.”