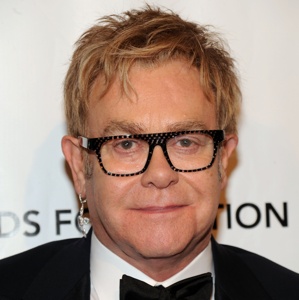 The rumors are true. Elton John has been hospitalized. According to Radaronline.com, the legendary singer was admitted to a hospital in Los Angeles on Wednesday for a serious respiratory infection that he first developed last weekend after his performance at The Colosseum at Cesar’s Palace on May 20th.

“This week the condition worsened, even with medication and rest, resulting in Elton being hospitalized at Cedars-Sinai Medical Center in Los Angeles at 6:00 a.m. Wednesday, May 23, where he remained throughout the day for extensive tests. Those tests resulted in the attending Cedars-Sinai physician recommending that Elton not perform any concerts for approximately seven days with complete rest and antibiotic treatment to cure his respiratory infection and prevent any damage.”

The good news is that he is going to be just fine and he’ll be donning those sparkling ensembles and multi-colored glasses in no time. Let me just say that those respiratory infections are nothing to mess around with either. Yuck! It may take him awhile to fully mend. But have no fear! Even though John has had to cancel his shows for May 24th, 25th, and 27th concerts in Vegas, fans can be assured that those shows will be rescheduled for sometime in the fall. You’ll just have to wait a little longer to see “Rocket Man” live.

Elton said, “It feels strange not to be able to perform these ‘Million Dollar Piano’ concerts at The Colosseum. I love performing this show and I will be thrilled when we return to The Colosseum in October to complete the eleven concerts soon to be scheduled. All I can say to the fans is sorry I can’t be with you. I hope to see you soon at this wonderful theatre at Caesars Palace.”