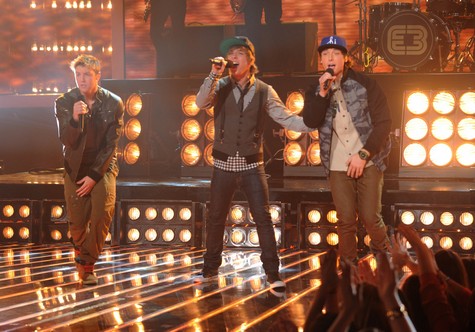 Emblem3 took the stage tonight on THE X FACTOR USA for their Final 4 video performance.  Emblem3 sang “Hey Jude” by Lennon–McCartney for the song Simon and Emblem3 decided to sing for their second song.  Tonight’s show the finale 4 performed live in front of coaches Simon Cowell, Britney Spears, Demi Lovato and AJ Reid for America’s vote and to make it another week.  Did you watch tonight’s performance show?  We did and we recapped it here for you.

Judges comments:  LA was prepared to rip them the shred. But he thinks they are teen heart throbs like the Beatles, but they did a great job.  Britney feels like it was an A level performance.  Demi thinks LA is right but is not sure you can compare them to the Beatles.  But she thinks they have potential.  Simon is so proud of what they achieved tonight.  He feels they nailed it tonight.

This has been the best song I have heart them sing.  I was shocked how well they did.  If you want to see Emblem3 in the finale, you have to vote for them.  Vote for Emblem3 at 1-855-THE-XF-03