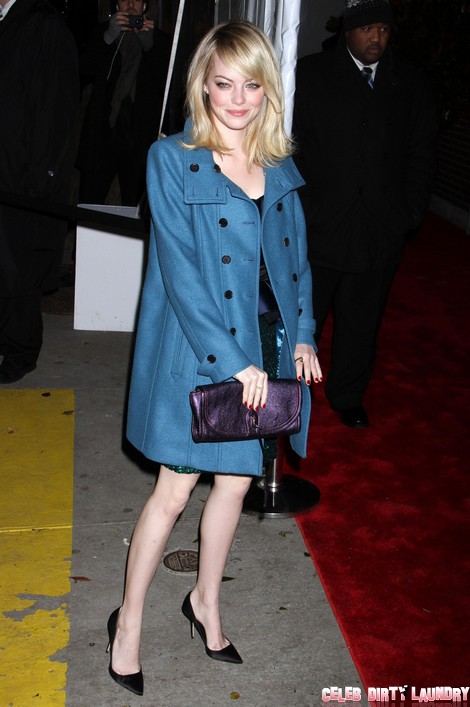 Emma Stone and a sex tape scandal sounds like a bad punch line. One cannot possibly imagine the hysterical actress having sexy time with a mystery man on a badly edited video. A hump-a-rump here, a dump-an-krump there, a pull-and-swing here, a smack-and-slap there – the mental image is too much to bear for sober people. Open that alcohol cabinet, Aunt Mildred, because you’re going to need Absinthe to get through this one.

According to RadarOnline, a sex tape of the actress does exist, but it is safely in the hands of the person she made it with. Let’s clap our hands and sing Hallelujah, because the awkward images of Stone doing the Kama Sutra won’t be burned into our memory for all eternity. Allegedly, the video was not made with Stone’s current boyfriend, Spiderman himself, Andrew Garfield.

Instead, the video was made when she was young and not as famous as she is today. According to a source, “Emma Stone has a sex tape and that’s a fact. She made it long before she started dating Andrew Garfield, and before she really became a household name. She was just young and probably thought nothing would ever come of it. The tape remains in the hands of the person she made it with, but that doesn’t mean there’s any guarantee that it won’t eventually hit the market. The higher Emma’s star rises, the more valuable that tape becomes.”

However, Stone has nothing to gain from a rogue sex tape. She is on the top of the world with one the fastest growing careers in Hollywood. She doesn’t need a blurry sex video to implant her in the minds of fans. We leave that to Kim Kardashian, who not only built a brand on her sex tape, but also became one of the highest paid reality television stars due to sexy time. Hey, who said sex doesn’t sell?

According to a close friend of the actress, “Emma’s really happy with her career and proud of where she is. There’s no way she would organize the release of the tape; in fact, she would fight to stop it. She has no respect for women like Kim Kardashian who became famous because they released a sex tape.”

The moral of the story kids: Don’t record yourself having sex. One day you might be nominated for an award at your school and one of the mean girls will play the video to your parents. Trust us; you don’t want your mother’s face to turn into Bruce Jenner.