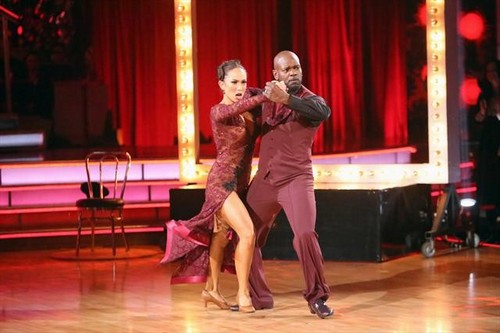 Emmitt Smith and Cheryl Burke were eliminated during tonight’s elimination episode on Dancing with the Stars All-Stars.  If you missed the results show we recapped it here for you!

Emmitt  and Cheryl  danced the Espionage Lindy Hop and the Tango to Leave Me Alone – Emmitt and Cheryl’s first dance was a fun and animated performance. Len liked the concept, Bruno said it was “the most fun performance”, and Carrie Ann said it was their “most animated performance ever!” All three judges awarded the couple 9 points. The total score for their first dance was 27 – a below average score for the competition.

Their second dance received the same scores and the same critique. Bruno critiqued their footwork, but Len thought they “coped marvelously well.” GRAND TOTAL SCORE – 54 – TIED WITH THE LOWEST SCORE OF THE NIGHT