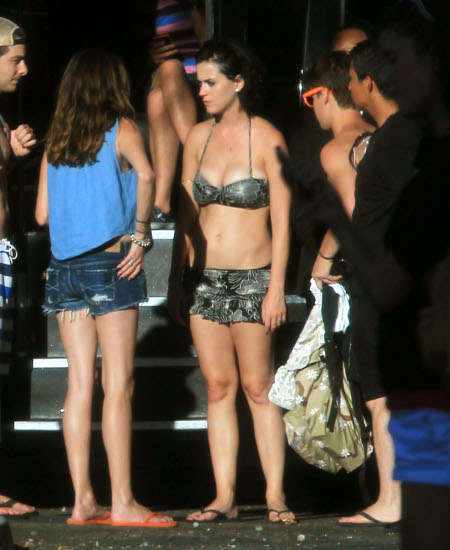 I’m sure at some point or another a drunk version of yourself drunk dialed someone. Well, pop singer Katy Perry is no different from you in that regard, as she recently drunk dialed her ex-husband Russell Brand! Since splitting with John Mayer a few weeks ago after a short summer fling, Perry has been partying nonstop with her new friend, now single actor, Robert Pattinson.

Perry and Pattinson were spotted partying together at the Soho House on August 22nd in Los Angeles. The two have been a shoulder for each other to cry on since their respected splits with their significant others. “Katy’s very disillusioned with men, but Rob told her she has to pick herself up and focus on work,” said a source. “He said that the right guy will come along when she least expects it.”

Perry has been so distraught over the failed romance with Mayer that she has been boozing it up harder than before and has brought Brand into the equation. According to the National Enquirer, Perry reportedly called him in tears and cried, “What’s wrong with me?” Well, Katy, it seems that you are a normal 27 year old that goes through men problems like most of the world.

At least Perry has an understanding ex that will still take her phone calls and cares enough to talk to her. According to the source, “Russell still cares deeply for her, and he’s furious that she was treated so badly, so he’s trying to comfort her.” Do you believe that? Sure, maybe, I don’t know. They both moved on so fast after their quick 14 month marriage. They both have been attached to numerous people and now Brand is dating Spice Girl Geri Halliwell.

Perry needs “to realize that Russell is being a good listener and there is no chance of them getting back together.” Do you think that will happen or will she continue to call Brand in her drunken stupor?