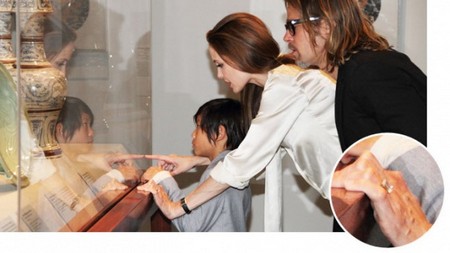 Angelina Jolie and Brad Pitt are engaged at long last after Angelina was spotted wearing an engagement ring and the jeweler who made the ring confirmed it. Earlier this year, Brad hinted that wedding was a strong possibility when he told CBS news. “Getting married means something to the kids. We will someday, we will. It’s a great idea. ‘Get mommy a ring.’ ‘OK, I will, I will,’”

The Hollywood Reporter announced: “I can confirm that, yes, Robert Procop did indeed design an engagement ring for Angelina Jolie, designed in collaboration with Brad Pitt.”

Angelina has been a fan of Robert‘s jewels. The two previously collaborated on “The Style of Jolie” jewelry line and she’s worn his designs at red carpet events.

In January, Pitt told The Hollywood Reporter that he and Jolie did hope to one day tie the knot for the sake of their children.

“We’d actually like to,” he said of making Jolie his wife, “and it seems to mean more and more to our kids. We made this declaration some time ago that we weren’t going to do it till everyone can. But I don’t think we’ll be able to hold out. It means so much to my kids, and they ask a lot. And it means something to me, too, to make that kind of commitment.”

At the time, Pitt declined to comment on whether he had proposed yet. “I’m not going to go any further,” he said, “But to be in love with someone and be raising a family with someone and want to make that commitment and not be able to is ludicrous, just ludicrous.”

Congratulations to Angelina and Brad!