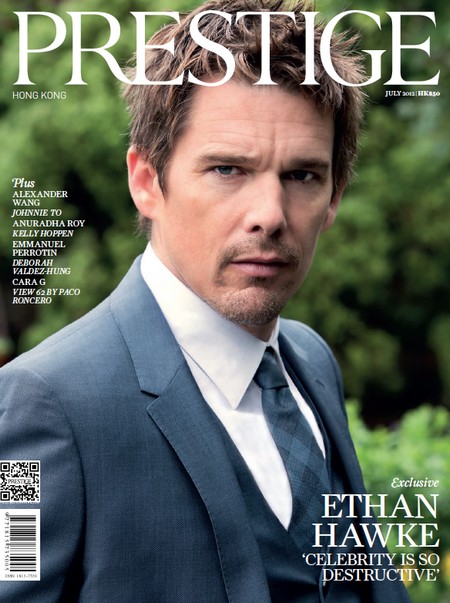 Ethan Hawke is known for being what we would call an actors’ actor.  He works because he loves the job.  He has never aimed to have the kind of fame and notoriety of Tom Cruise, but after 20 years in the business and portraying characters in movies like Dead Poets Society and Training Day, he has carved quite a life for himself.  The stage and screen veteran recently sat for an interview with Hong Kong’s Prestige Magazine and here are some highlights.

On choosing his projects:

“I’ve never really been that confident in my abilities as a shape-changer. There are some actors who can really transform themselves and it can be really breathtaking. For me, I have never really had that ability, and one of the things that I try to do is to be in lots of different kinds of films.  It keeps me excited”.

On the difference between stage and film work:

Acting on the stage is just a much more difficult task. I always like to say that you very rarely see someone be awful in a movie. You see them be not good, or not as good as you hoped them to be, but they are rarely awful. But often when you go to see a play someone will truly suck because you’re just so much more exposed. In film you have a cinematographer and you have a composer and a lighting designer, and they pick the best take and they pick the best angle. On stage there’s no take and there’s no angle and you have to find your own light. Being live, in front of an audience, every night must keep you on your toes. I find it incredibly rewarding. There’s just something about it that for me, the older you get, it keeps you in the present.

Where you’ll see him next:

The movie I did with Pawel Pawlikowski [The Woman in the Fifth] is a fantastic art  film, I’m really proud of it. It’s a full-blown “cinema as self-expression” kind of movie. Then Sinister is a full-blown, Friday-night horror film. Then I just finished this car-chase movie [Getaway], which is a kind of guns, tits and fire engines kind of action movie, and now I’m starting to make another movie with [Before Sunrise/Before Sunset director] Richard Linklater.

On his parenting style:

I try not to be desperate at all with anything with the kids. Having four of them you see how little control you have. When I had my first, I thought my parenting was so important but when you have four of them you realize human beings are so completely themselves, they are so unique unto themselves that it doesn’t have that much to do with you. I mean obviously you want to create a situation where they’re healthy and have a good education. But apart from that you don’t have any control really about whether they’re literary or whether they’re interested in sports.

Try and get your hands on a copy of Prestige to read the rest of this lengthy interview with Hawke.

Are you an Ethan Hawke fan?  Head to our comments section below and tell us what roles you’ve most loved him in!