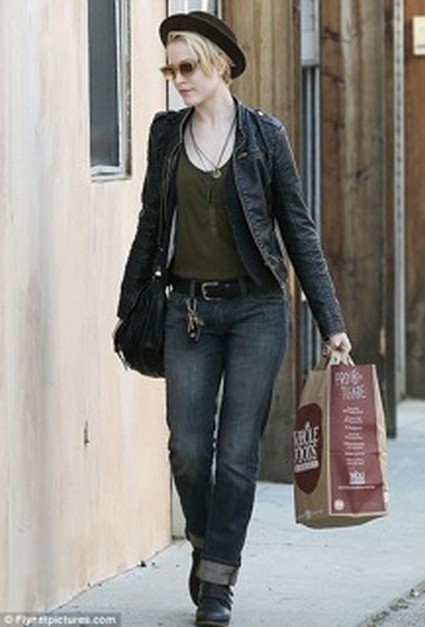 Evan Rachel Wood was engaged to shock rocker Marilyn Manson for some time, so—unfortunately for her— this really isn’t too hard to believe. As Celeb Dirty Laundry reported on January 9th, the “Idea of March” actress is engaged to 25-year old “Man On A Ledge” star Jamie Bell. But the Actress is infuriated with The National Enquire for publishing a story that she has requested an open marriage so she can explore her bisexual curiosities.

The Enquirer reported earlier this week that Wood only agreed to marry her on-again off-again boyfriend Bell if he agreed to her terms for an open marriage. “Evan says Jamie’s as open-minded as she is, so if she wants to pursue a girl she fancies, he’ll have no problem,” The tabloid quoted a “friend” as saying. “Evan’s a smart girl and talented actress, but she’s as confused and flighty as they come in romance. I don’t know if their idea of an open marriage is workable.”

It didn’t take long for 24-year-old Wood to blast the tabloid via popular social media website, Twitter. “FYI the national enquirer makes me sick. I do not have an open marriage. They can take their lies and shove it. Sorry ladies.” She said, denying the story.

The starlet recently posed topless for Flaunt Magazine and discussed her views on sexuality. “There are so many people going against their instincts or what’s natural, and I think that’s a problem – that repression, guilt, and fear really produce violence and hatred,” She said. “You have to make room for the possibility of there being more than one way to live. I never judge these people or hate them. I just am sad for anyone who is so set in their ways without experiencing other options.”

Wood originally came out as bisexual in the May 2011 issue of Esquire.