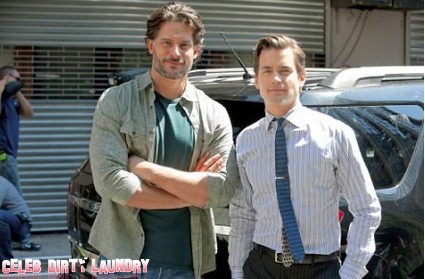 Joe will guest-star opposite his real-life friend, Matt Bomer.  We have an exclusive behind the Scenes look at Joe Manganiello on ‘White Collar’ below for your enjoyment.

Episode synopsis: Peter (Tim DeKay) and Elizabeth (Tiffani Thiessen) play Rear Window, spying on their new ex-con neighbor, played by Joe Manganiello. Will he go back to his criminal ways? Neal (Matt Bomer) goes undercover with Mozzie’s (Willie Garson) help to find out what he’s up to. This episode is directed by former White Collar villain Andrew McCarthy.

Fans can get special insight from Sharif Atkins during the episode on White Collar Character Chatter and  fans can win the actual Fedora worn by Neal Caffrey by checking-in to GetGlue during Tuesday night’s episode.

Make sure to tune-in Tuesday at 10/9c on USA Network and in the meantime check out the video below!