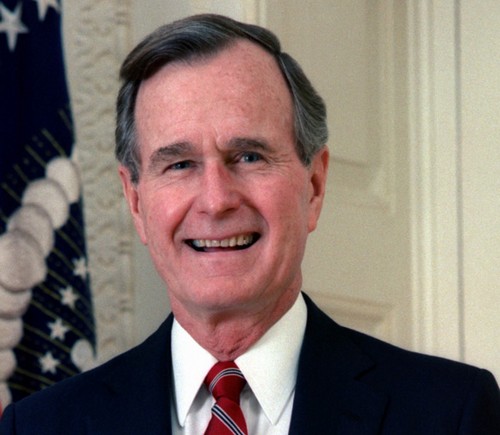 Celeb Dirty Laundry is exclusively reporting that a confidential source has informed us that former President George H.W. Bush has been read his last rites as a precautionary measure given the gravity of his current medical condition.  While George Bush Sr. remains in the ICU at Methodist Hospital in Houston, Texas, we have also learned that family and close friends have been summoned.  The source reported that family and close friends responded to the reading of the last rites in an emotional manner, some crying and weeping openly.

On Wednesday, Jim McGrath, Bush’s spokesman in Houston, said the 88-year-old former President had been admitted to the ICU on Sunday when his condition worsened. McGrath added that Bush was alert and talking to medical staff, adding that doctors were cautiously optimistic about his treatment and that Bush “remains in guarded condition.” He said Bush was surrounded by family.

Early Today, McGrath told The Associated Press he had no new information on Bush’s condition and that he would release another statement “when events warrant it.”

Bush has been hospitalized since the day after Thanksgiving, Nov. 23, admitted for a cough related to bronchitis. Bush remained hospitalized over Christmas suffering from a worsening fever and “a series of setbacks.”

According to McGrath, “It’s an elevated fever, so it’s actually gone up in the last day or two. It’s a stubborn fever that won’t go away.”

While in hospital Bush has been visited by his wife, Barbara, his son, Neil, and Neil’s wife, Maria, and a grandson, McGrath said. Bush’s daughter, Dorothy, arrived Wednesday in Houston from Bethesda, Md. The 41st president has also been visited by his sons, George W. Bush, the 43rd president, and Jeb Bush, the former governor of Florida.

We wish the President and full and speedy recovery.  We are sorry to have to report such alarming and worrisome news. Get Well Soon – George H.W. Bush.