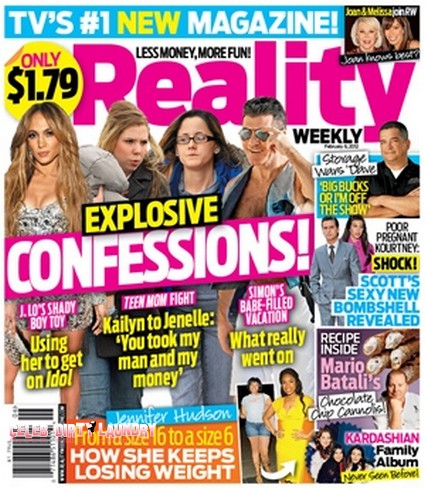 The current issue of Reality Magazine features the cover story ‘Explosive Confessions!’  The new reality magazine claims to have explosive confessions on three popular television celebs.  They have the details on Jennifer Lopez‘s shady boy toy Casper Smart and how he is using her to get on idol.

Reality TV has the scoop: Explosive Confessions! Teen Mom Kailyn reveals to friends how Jenelle stole her man and her money. Simon Cowell tells RW what really went on on his babe-filled vacation.  Plus, never-before-seen pics from the Kardashian’s family album, Mario Batali’s chocolate chip cannoli recipe, and we’ll examine whether J.Lo’s boy toy is just using her to get on TV!

The magazine also claims that Kourtney Kardashian who is expecting baby number two with her boyfriend Scott Disick is in shock.   Scott’s sexy new bombshell has been revealed and of course the magazine has the information.  They also have a Kardashian family album that has never been seen before.

People are obsessed with reality TV – even if you don’t watch reality television, it’s becoming increasingly hard to avoid.   American’s are hooked so what better idea than a reality magazine.  Reality magazine claims when it comes to reality TV, they are the one place you can get all the details you crave about Reality TV.  So to find out all this and more pick up a copy of the new magazine and let us know what you think of it!