Extreme Celebrity Flaws – Hollywood Stars As They Really Are! (Photo) 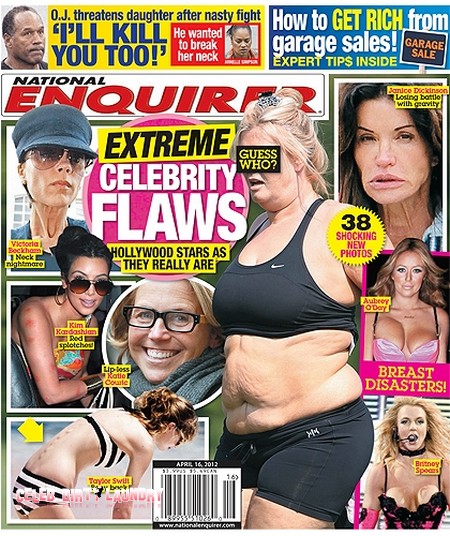 The April 16th, 2012 cover of National Enquirer features the cover story “Extreme Celebrity Flaws – Hollywood Stars As They Really Are.”  The magazine has all the dirt on how celebrities are just like us, they have flaws.  The only difference is they have the money to spend to hide those little flaws that Mother Nature has handed out to them.   NQ has managed to grab some photos of celebs not looking their bestest and of course they are sharing the photos and the info with us.

The magazine leaves out the tiny detail that everyone can take a bad picture sometime and they have managed to find some of the very worse celeb photos.  They split the categories into: Just Plain Weird, Fright Masks, Armed & Dangerous, Topsy Turvy and Freaky Fingers.

In their ‘Just Plain Weird’ category we have Victoria Beckham who they say should stop wearing huge Tom Ford sun glasses because the big specs makes her neck look concave.  She has a neck nightmare going on. Next on their hit list is Taylor Swift who they have a picture of her bending over in a bikini with her back bone sticking out.  They call Taylor an alien. Finally in the just plain weird category is Kim Kardashian who they say has psoriasis and her outbreaks are just heartbreaking.  Certainly upsetting but not weird.  I guess they feel it is weird because it makes Kimmie not perfect.

In the Fright Mask category they have Joan Rivers, who they would love to see age naturally, Kris Jenner who they say if her upper lip got bigger she would float away LOL and Lindsay Lohan who is desperately trying to look like Marilyn Monroe and failing badly.

Armed and Dangerous includes Madonna who doesn’t need a Halloween costume with her skeletal arms.  Thandie Newton is being picked on for too thin arms and Cameron Diaz for too muscular arms.

If you want to see all these pictures and more, pick up the current issue of National Enquirer on stands now!