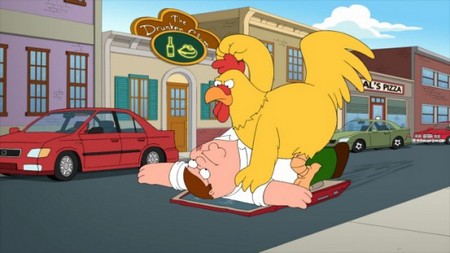 Tonight an all new episode of  Family Guy airs on Fox and tonight is the season finale and it is called “Viewer Mail #2 / Internal Affairs”.  We are being treated to a one hour special for the finale.  Stand by as we live blog tonight’s episode with all the up-to-the-minute details.

On tonight’s finale and double episode, continuing a popular show tradition, Brian and Stewie respond to viewer mail. We meet a British version of the Griffins, Quahog is taken over by a famous comedian and we get to see the world from Stewie’s POV.

Then, Peter encourages Joe to have a one-night stand with his attractive new partner (Anna Kendrick, “Up in the Air”) in order to even the score with Bonnie (Jennifer Tilly) for her own indiscretions.

But when Bonnie finds out and threatens divorce, Lois insists that Peter get them back together. Meanwhile, Peter has another run-in with the angry chicken which makes for yet another epic fight in the all-new, special one-hour.

We will be live blogging the episode with all the up-to-the-minute details at 8PM EST.  Don’t forget to come back to this spot and refresh often to get the most current updates!

Tonight’s recap: Brian and Stewie Griffin introduce themselves and are answering mail from fans, first one is from Lee and asks if Family Guy was based off anything and Stewie answers The Simpsons and Brian corrects him telling it was based off a British show. We then see the Griffin family all turned into British counter parts of themselves, they all have bad teeth and long noses, Brian is no longer a dog but a horse.

We then see Peter, Quagmire, Joe and Cleveland sitting in the pub watching the news and it metions the coming of the Queen and Trisha Takanawa is Indian instead of Asian. Peter then states he’s related to the royal family and will prove so when she visits. The British Griffin family are standing at the even and calling Prince Charles a wanker, then a British version of the Chicken starts a slap fight with Peter. Peter then tries to get a lock of the Queens hair and keeps setting up a portable Barber Shop with Chris trying to fool her into getting a haircut, then the two start driving after her on a motorcycle and Peter has a pair of scissors trying to cut her hair and then we hear the coach of the Queen’s carage inside scream she’s dead. Peter and CHris walk out whistling pretending nothing happened, then the cops come chasing after them. Then the British Griffin family is at home and Peter says he guesses he may not be related to the Queen.

Peter then tells all the Robin William’s to spread their humor all over the world and then he keeps five of them and makes them all dress up as his family, making him look insane and then we see Stewie sitting on top of the roof and mention that Disney wouldn’t allow them to use Genie from Aladdin in the episode.

Louis starts waking up Stevie and we start to see from is POV, Louis starts changing Stewie and sees she found a dime and Stewie starts pulling on Louis’s hair and makes fun of her. Meg then offers to give Stewie her ring which is said to be her most important possession, then a kid at the park tells Stewie to go down the slide and he starts playing it cool saying it’s fun and then tries to go down and notices the height and gets scared he goes sliding down with his eyes close and then a fat kid slides down and lands on top of him. Stewie then leaves the house and grabs on to the exhaust pipe of the car and then Brian stops in front of squirrel and then runs it over.

Stewie looks at the carcass and then looks at his left and notices Herbert under a school bus, Stewie is then in the bathtub and start playing with his toys. Peter decided to get in with Stewie and he tries to escape. Stewie is then been put to bed and uses a time machiene and then stop Kurt Cobain from committing suicide and makes him just eat ice cream, then we see a childrens book base on Foot Loose. Peter comes home wasted and then tries to kiss Louis but denies him since she’s reading to Stewie. Then she puts Stewie too bed and leaves, but Stewie hears loud sounds coming from his parents bedroom and imagines Peter and Louis chopping down a tree.

Peter is with Quagmire are in the Drunken Clam and they are watching a show talking about how awesome the movies Gremlins is, then the news comes on and it starts talking about a drug bust that Joe Initiated and is congradulated when he walks into the Clam. Joe then invites the two too a party in celebration of Joe bust and the two accept. Peter then crashes his car into another car and the Chicken comes out, the two get into a speed chase and start beating the hell out of one another. Stewie teleports to the scene and gets hit, both the Chicken and Peter are then teleported to a Western era and continue fighting on a carriage and then ontop of the back to the future car and come back to modern time. The two then take their fight into a laboratory and clone themselves to where a huge was against the clones breaks out andthen a huge explosion happens killing all the clones. Both are still fighting in a space ship now headed out of the atmosphere, the two start fighting in zero gravitiy. The spaceship is now heading straight into the planet and crashes on a big ship and they some how come out fine and continue their fight. The too then are fighting on a crane and as the chicken is about to win Peter turns on the crane and kicks him off and the Chicken then gets hanged but falls off and gets skewered to where the spaceship jet turns on and burns him to death.

Peter walks out of the debris of their battle and then we get a close up of the Chickens face that he is alive.

Joe starts telling Bonnie about his excitement for his party later on and she isn’t all that thrilled about the whole thing, Quagmire and Peter get to the party and Quagmires pick up line to the bartender makes her cry. Nora starts talking to Joe about his achievements and she then she kisses him, which surprises Joe since he is married.

Back at the clam the day after Joe explains to Peter and Quagmire about the kiss, Quagmire asks if he slept with her. Joe then says he’d never do it, but Quagmire reminds him of his wife Bonnie cheating on him in Paris. So they tell him it’s to balance out their marriage if he sleeps with her, Joe then sees her at the police department and Nora apoligizes for the situation. Bonnie calls the police department by accident and completely ignores Joe. Joe starts remembering what Quagmire and Peter said and he decides to go for it. The two start eating in his personalized handicap stall and he sleeps with her. Then the Griffin family go over to Joe and Bonnie’s house for their sons birthday, Joe then confesses to Quagmire and Peter that he did go through with it. But Joe says he feels more guilty then happy and then Bonnie enters the room and heard the whole thing over the baby monitor. Joe then starts arguing with her about his affair and then Bonnie says she herself never slept with the French guy but then Joe still believe she was still pushing him away. So the two decide to have a divorce, while Peter already started opening their sons gifts.

At the Griffins family Chris asks if the Swanson divorce will make him live with his grandparents and Peter tries to explain their divorce with the bible. Peter then talks to Joe as he’s packing his stuff and he then says he met Bonnie when she was a stripper and it was love at first sight. Peter then decides to help the two get back together after hearing the story of how the two got together, so Peter decides to get the two to reunite at the strip club they met at. Joe rolls in and sees Bonnie there and they realize that Africa by Toto is playing and that is their song, Joe then says he misses Bonnie and as he’s leaving she offers him a lap dance. But then Joe declines it and says “No, I’m giving you one.” Then Joe proceeds with one the weirdest lap dances ever witnessed, the two then kiss and decide to get back together kissing in the middle of the strip club.