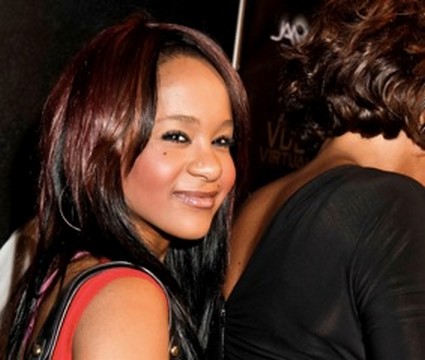 In the wake of her mother’s shocking death yesterday, friends and family of Whitney Houston’s 18-year-old daughter Bobbi Kristina Brown are worried that she may be suicidal. A source told TMZ, “The family feels Bobbi Kristina needs help and they are considering rehab as an option.”

Bobbi Kristina was hospitalized twice in twelve hours following news of her mother’s death. Though a family friend said she was devastated and suffering from extreme stress, RadarOnline is reporting that she was hospitalized at Cedars-Sinai Hospital in Los Angeles for mixing alcohol and sedatives. “She tried to ease the pain of losing her mother by having a few alcoholic drinks,” the insider said. “She was distraught, on the verge of a complete breakdown. Not knowing what to do, members of her mother’s entourage tried to calm her down with a sedative. The two were an unfortunate mix and she ended up passing out.”

The teen was spotted fighting with police last night, who had barred her from entering her mother’s Beverly Hills Hotel room. Despite the chaos in their lives, the 18-year-old was reportedly very close to her mother and it seems that she may share some of her mother’s talent along with some of Whitney’s frailty. In March of last year, the Enquirer posted pictures of the teenager snorting a white, powdery substance.

Bobbi Kristina’s father, Bobbi Brown, is reportedly skipping a concert stop in Nashville tonight to be by his daughter’s side.