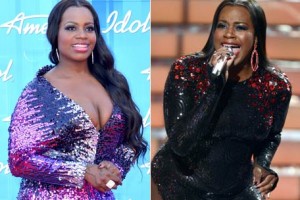 Fantasia returned to American Idol last night to perform Elton John’s “Take me to the Pilot” with eliminated contestant Joshua Ledet on the season finale. While many people were excited to see Fantasia return to her stomping grounds where she won the reality show’s season three American Idol crown, it wasn’t her voice viewers were talking about. It was her ensemble of choice. No longer was Fantasia sporting her spiky hair cut that she looked so adorable in back in 2004 (and even on her train wreck reality show), she threw on a long weave that laid on the middle of her back and she squeezed into a skin tight glittery red and black cat suit that featured slits that rode all the way up her thighs.

Fantasia’s choice for the red carpet wasn’t any better either, unless you are into the glittery and not so flattering. As you can see in the photo on the left (above), the 27-year-old slapped on a purple sequined gown that seemed to hug her shoulders and neck a tad too tight. No wonder why she decided to change into a different performance ensemble.

You can check out her hideous cat suit in all it’s gloryhere.

Check out Fantasia’s duet with American Idol’s Ledet (that had the audience and the judges on their feet) below.

What did you think of Fantasia’s performance with Joshua Ledet? And how about that cat suit? Leave your comments in the space below. We’d love to hear what you have to say!