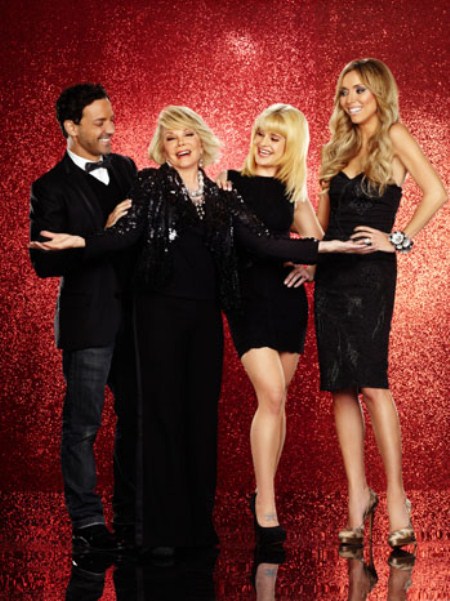 If you’ve never watched Fashion Police before, you are missing out on a panel of fashion-conscience celebrities and stylists that add some sexual innuendo, strong language; all the stuff I expect from a panel that has Joan Rivers on it.

Together, the panel and Shannen will dish out who they think are the worst and best dressed stars of the week.

Just in case you didn’t know, Shannen is not only an actress, but she produces, writes and directs. She is probably best known for her time spent on Beverly Hills 90210 from 1990-1994.

Now, what will in fact be interesting tonight is that Shannen has no fashion background and at times has gotten “worst dressed” herself requiring a fashion intervention. But, tonight she doesn’t deny it and will actually share with us tonight her worse look ever.

Also, tonight, we will get see the “mother” of all closets when Joan opens the doors and gives us a tour that will no doubt leave us speechless!

Now for the nasty! They will talk about who has the biggest butt and Kat Graham will get in on the action when Joan wants to measure all the derrieres with her own hands.

There will also be a little game playing tonight, “Shannen Says” where they listen to outrageous things Shannen has said about people in the past, but get this, they have to guess who she was talking about.

It’s all happening tonight on E! at 10:00pm and we will be live blogging the show, so don’t forget to come back and refresh your screen often, for all the awesome updates.

Joan wishes us all a “Bonjour”. Time for the “Must See” Giuliana announces number five for the week, Eva Longoria wearing Marchesa. Joan says she pulls it together, George thinks it is a Cannes dress, Kelly loved the back of the dress, she thought it was divine, but she didn’t like the front as much. Giuliana thinks she looks beautiful, just stunning.

Number four this week is Diane Kruger and she is wearing Nina Ricci. Joan says she looks like when Peter pan and the lost boys ordered a hooker. George thinks her look is awesome. Kelly loves this dress. Giuliana likes the dress, but thinks you need zero perfect body fat to wear it.

Number three is Cheryl Cole in Stéphane Rolland Spring 2012. Joan thinks it looks like CSI, she just walked through a crime scene. George loves it, she looks gorgeous. Kelly thinks it looks like she’s floating, like the ghost of Cannes. Giuliana doesn’t understand why she would put red on the bottom when she is on the red carpet.

Number two goes to Jane Fonda who is in Versace. Joan thinks she looks amazing and that is why we should all work out, she’s 74. George thinks she looks great and loves the nude illusion on the top of the dress. Giuliana would love to see her in a different hair style, not the frosted tips. Jane also wore a Stella McCartney and it was a great and Giuliana loved it.

Number one is Bill Murray and he is wearing “everything” plaid in multiple designs and colors that just don’t match. George loves his look, it’s fun. Joan thinks at 25 he would be adorable, but at his age, they should put him away. Kelly loves him for it, because he is having fun. Giuliana thinks if he wanted to have fun, he should have went to a bowling alley or a zoo.

All the co-hosts toast everybody at Cannes, except for poor Bill Murray.

Kat Graham from the “Vampire Diaries” joins the show and the conversation goes to the size of everyone’s butts, Joan feels everyone to see who has the biggest. Kat shows photos of herself in various outfits, some are hits and some are misses.

Now, the “Hot Ticket” is fashions from the Billboard Music Awards last week. First is Miley Cyrus and she was wearing Jean Paul Gauther. Goerge didn’t like the plunge. Joan thinks she looks sexy and cute. Kat thinks it should have been a little longer. Kelly sasys if she had her body, she would wear the same thing. Guiliana thinks it was all wrong.

Next is Brandi in a fringed Herve Leger dress. Joan thinks she looked amazing, perfect, perfect. George liked the dress on her, but not the shoes. Kat thinks it’s a home run.

Time for Kat to leave and for us to move on to the hottest swimsuits.

Weather you are on the beach in Caanes or just at home, swimsuit season is here. There are so many trends; a boho, string bikini and a wedge is perfect for the beach, retro style, a high waisted bloomer with a bra lit top and cut out suits.

Joan loved the models but wish they had that killer bitch look. So, joan brings out “Little Miss Mia”, she looks to be about 7 and she rocks the runway.

Our next guest is Shannen Doherty who recently got married and started her own reality show “Shannen Says”. Shannen talks about her relationships from 90210 and she admits she wasn’t friends with anyone back then, but since, she and Jenny McCarthy have become good friends.

Shannen shows off some of her worst looks then Joan starts a game, “Shannen Says” (clever plug for Shannen’s show). Basically Joan reads of quotes from Shannen, “I never had a sex tape and I always wore panties” and “to be a bitch or not to be a bitch, that is the question” and we find out that Shannen said those to two pushy interviewers.

Shannen is needed as a referee for “Bitch Stole My Look” Jennifer Lopez vs. Rosario Dawson wearing an orange-ribbon belted Salvatore Ferragamo Spring 2012 gown. George loved the color blocking, but thinks it would look better on someone thinner. Shannen thinks it is absolutely hideous and doesn’t belong on anyone, it makes the boobs look like they are conncted to the waist. Kelly says it makes two of the worlds most gorgeous girls look like shit.

After a Fashion Police poll, 64% think Jennifer wore it best.

Now it’s time for the grand finale of “Spring Fever Fashion Raids.” Joan has flown in George to check out her closets. First Joan shows off her special hats, one she wore to the Royal Wedding. Her library has her furs, then on to her main closet with more furs and some are fake and some are real. Then on to Joan’s gowns and one is an Oscar de La Renta that is the first gown that she has ever worn. Now on to her real closet; shoes, purses and a rainbow of jackets all neatly organized. Then on to her daytime casuals and her secret closet that has yet more gowns. The last closet is her theatre closet, all her costumes, all her boas and all her feathers. Imagine, she didn’t even show him the good stuff!

Now it is time to vote for the best and the worst celebrity looks of the week.

Joan announces that the win for best dressed goes to Jane Fonda.

Joan announces that the win for worst dressed goes to “Jennifer Lopez Dawson from The Block”. Joan says that the dress is so bad that Bill Clinton wouldn’t even dignify it with semen.