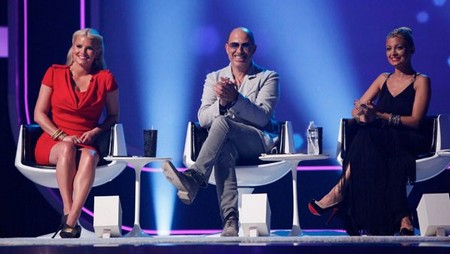 Tonight is an all new episode of Fashion Star called ‘What’s Your Campaign.’  Stand by as we live blog tonight’s episode with all the up-to-the-minute details. On last weeks show the “No Offers” were Ross, Nzimiro, Sarah and Nikki. all four designers are called to the stage.   Mentors get to save the designer they believe deserves to have a chance to be the first “Fashion Star”, Nicole announced that they chose Nzimiro Oputa.

Ross, Nikki and Sarah are facing the buyers one last time and they decide that Sarah Parrot is going home.  If you missed the episode you can read our full and detailed recap here.

On tonight’s show it is the next evolution of Fashion Star – we are down to the final seven designers and tonight they will put their futures on the line with one design.  This week’s episode is called ‘What’s Your Campaign?’ and the mentors help the designers create a brand campaign for their collections.

As seen in the preview below it looks like the mentors cannot make a decision, John Varvatos says ‘We are in a stalemate.’  It is a not to be missed episode!

Fashion Star is on tonight at 10 PM on NBC and we will be live blogging it with all the up-to-the-minute drama and elimination. So make sure to come back to this spot and spend the evening with us!  Refresh often to get the most current details!  If you want to see a sneak peek of tonight’s episode below!

RECAP: There is only two weeks left to the final and the design studio is heating up. Opening the show tonight is a glimpse at mentors, John Varvatos’ spring collection and damn, the male models are hot! Cindi Leivi, Editor and Chief of Glamour magazine is there to coach the designers for this week’s challenge.

Kara Laricks is working on a tuxedo shirt, while Nzimiro Oputa wants to design a sweater but Nicole has her reservations on whether he will be able to tell a story for it. Kara wants to send a message through her clothing, that you can be whatever it is you want to be. This is Nzimiro’s first photo shoot, so he is really nervous.

Nikki knows how to make a campaign, she is choosing a maxi dress and Jessica tells her to show glamour because she thinks she has the potential to go all the way to the end. Luciana is also doing a dress, she brought some fabric from home and John likes it. Luciana says her brand is about young women who like taking risks and don’t give a damn. Luciana’s concept is creating a fantasy land, Nikki found the photo shoot to be awful and beauty pageant’ish.

Orly is creating a story of this “IT” girl that is posing for the paparazzi. Ronnie wants to represent himself in the task, chasing his dream.  Ross is making a vintage inspired hunting jacket for a southern belle, Jessica knows he can make this jacket amazing and suggests some colors for him; Jessica loved the olive, but he is going to use the navy.

The “No Offers” are Nikki Poulos, Ross Bennet and Orly Shani, all three designers will be called to the stage. Mentors get to save the designer they believe deserves to have a chance to be the first “Fashion Star”, John announces that they are locked and cannot make a decision, they are leaving it up to the buyers.

All three designers are facing the buyers one last time, they decide to save Nikki Poulos and Orly Shani.