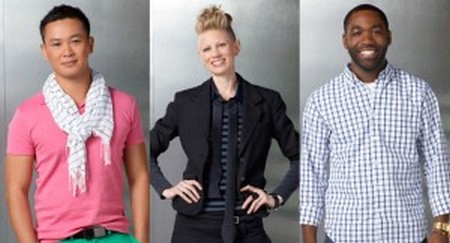 A new episode of Fashion Star airs tonight and the episode is the finale of the season.   The remaining designers Ronnie Escalante, Kara Laricks and Nzimiro Oputa will be squaring off against each other for the crown of ‘Fashion Star’ and they $6 million dollar prize.

On last week’s show  over half the remaining designers make sales, the top offer going went to Nzimiro Oputa from Macy’s for $100,000.   At the end of the episode  Luciana Scarabello, Nikki Poulos and Orly Shani were sent home, even though some of them sold pieces.

When we started the competition 14 unknown fashion designers were given the chance to win a multi-million dollar prize and launch their own collection. Now we are down to the final three.

On this week’s Fashion Star after creating a capsule collection for all three stores, one of the three finalists will become America’s first Fashion Star!

Fashion Star is on tonight at 10 PM on NBC and we will be live blogging it with all the up-to-the-minute drama and elimination. So make sure to come back to this spot and spend the evening with us!  Refresh often to get the most current details!  If you want to see a sneak peek of tonight’s episode below!

RECAP: Tonight we are down from 14 designers to 3 and by the end of the night, the winner will be announced. The show opens up with Jessica Simpson’s spring collection fashion show that has an island theme. What a way to start a grand finale, a perfect way to start the show.

This week the designers were asked to create nine looks, three for each store:

Three for H&M – Ronnie is going with a 70’s glam look and is ready to bring it tonight, he doesn’t want to be in the bottom ever again. Kara wants to do a men’s trousery short, something that fits with the trend. Nzimiro is going to do two men’s designs and one womens. Time for the designers to show what they’ve got.

John thought Kara’s dress was a stand out but he didn’t like the crotchy pant suit, Nicole loved Nzimiro’s women’s design.Jessica thinks Ronnie should have thrown in a little more color. It’s time for Nicky to decide who she wants to make an offer to, she loved Kara’s fashions but finds the drop crotch a little difficult. Nzimiro’s women design blew Nicky’s socks off. When it came to Ronnie, Ricky was happy to see what he did but there should have been more vibrant colors.

It’s now time for the designers to work on their Sachs pieces.  Ronnie is really digging deep for this one, Taran doesn’t think he has shown everything he can give. Ronnie is going to do a structured dress, a day dress and a suit; he wants them all to look perfect. Kara feels like she has already done everything for Sachs so this time she is doing a pant that is half pant and half skirt.  Nzimiro’s collection is “beach to boardwalk”.

John loved Kara’s designs, they were so inspiring. Jessica thinks Nzimiro nailed it tonight. Nicole loved Ronnie’s white suit, his best showcase yet. Taran loved all the designs that Kara did, he calls her a leader. He also loved Nzimiro’s designs and thinks he came a long way. Taran didn’t understand Ronnie’s designs, he doesn’t think they are a capsule collection.

Ronnie is going to do a tuxedo look, stylish but not too stuffy. Nzimiro is doing pullovers, polo, shorts and pants, he is feeling a lot of pressure. Kara is working on a dress and she is worried that she is not as commercial as the two guys.

Jessica says that Kara never disappoints and hopes it translates to Macy’s. John thinks Nzimiro plugged right into Macy’s. Nicole loved Nzimiro’s designs. John thought Ronnie’s suit was great, but the dress was unbalanced. Caprice thinks Kara’s line has a place on their contemporary floor. Caprice thinks Nzimiro absolutely nailed it and there is no doubt in her mind that every look would service the Macy customer. Caprice tells Ronnie that he found a way to stay true to himself and she is pleasantly surprised with the suit he created.

The designers are called to the stage one last time, Ronnie Escalante, Kara Laricks and Nzimiro Oputa.

The winner is KARA LARICKS

That’s it for season one of Fashion Star, what did you think about it? Sound off your comments below, did you think Kara deserved to win? Fashion Star was renewed for another season, so don’t forget to come back for season 2 when we will be giving you an awesome recap of every episode.