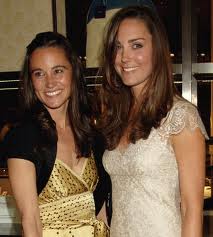 The successful stalking of Pippa Middleton by two obsessed fans has raised concerns over the safety and security of her sister, Kate Middleton bride of Prince William.  Alarm bells were sounded over royal security after reports of fans ringing the Middleton family’s doorbell were verified.  Two teenage girls claim in a video archived on Twitter that they called to deliver a scrapbook of letters that was dedicated to Pippa Middleton.

Imagine how vulnerable and porous royal security has become if two teenage girls could so easily make this penetration.  The Duchess Kate’s parents, Michael and Carole Middleton have had a number of unexpected and unwanted “visitors” to their home in Berkshire.

The EXPRESS covered the story:

According to the teenagers last week, Carole gave them an address to send the book to, saying: “I’m really sorry, I just turned someone else away. I can’t actually accept it for security reasons but if you send it to this address I’m sure Pippa would really like it.”

Former royal protection officer Dai ­Davies said the book would probably end up at the Fixated Threat Assessment Centre at Scotland Yard which investigates the stalking of public figures.

He said: “While these two girls were clearly just having some innocent fun, it raises questions as to the ease with which those connected to Her Royal Highness can be approached and may cause debate as to whether they are adequately protected.

“The biggest threat to royals and their extended families comes from fixated persons or obsessives. With the Duchess and her sister Pippa, they are like bees to a honeypot.

“Social networking also gives rise to a great many problems because there is no way of controlling the information out there. Twitter is a vehicle for fanaticism. There should be a review to see what legislation can be brought in to protect people.”

During the teenagers’ hour-long video, filmed in one of their bedrooms, they reveal they were dropped off by a mother on Tuesday at the Middletons’ five-bedroom house in Bucklebury. They spent five minutes building up the nerve to approach the door.

“I was really scared,” said one. “We heard voices and we thought it was Kate’s voice. We rang the doorbell and Carole poked her head around the door. I couldn’t talk. My mouth went dry. I was hyperventilating.

“We said, ‘We’re sorry for disturbing you but we have something for Pippa’. I was literally dying.” The girls go on to describe the Middletons’ golden retriever and two black cocker spaniels, one of which was Lupo.

The teens go into great specifics about where the house is located and posted photographs of the front gate online. Sounds like it is time for added security for Kate – we can’t let anything happen to her as she is the greatest thing to happen to the Royal family in decades, perhaps centuries!

Do you think the royals and their relatives require heavy security?  Let us know in the comments below.