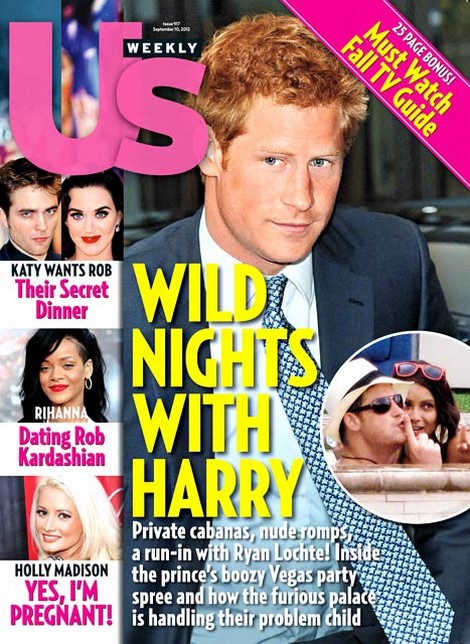 The current issue of US Magazine has the cover story, “Wild Nights With Prince Harry.”  This week’s issue addresses the story everyone is talking about, Prince Harry‘s naked romp in Las Vegas.  If you missed the story, Prince Harry had a Las Vegas shindig at the Wynn Hotel and Casino and during the wild party he displayed his crown jewels for the world to see.

The magazine claims they have all the details of what happened inside the boozy party spree, the private cabanas, nude romps and a run-in with Olympic champion Ryan Lochte.

Us Magazine has the scoop: “he 27-year-old redhead “had two things in his sights: vodka and women,” fellow Vegas partier Melissa Vagner tells the new Us Weekly, out now, which has all of the jaw-dropping details on Harry’s wild weekend.  Adds another woman who partied with Prince William‘s little brother: “He was naked for a long time at the party . . . He didn’t seem to care what he did.”

Now the next question on everyone’s mind is how is the palace going to handle Prince Harry and how are they going to rein him in.  The magazine has the details on how Queen Elizabeth 2 reacted when she heard the news and if the naked romp will affect his military career.  As upset as Queen Elizabeth 2 is at Harry for embarrassing the royal family yet again, her primary concern is that Harry doesn’t face a tragic end like his mother, Princess Diana.

To find out more about Prince Harry’s naked romp and a whole lot more, pick up the current issue of Us Magazine on stands now.