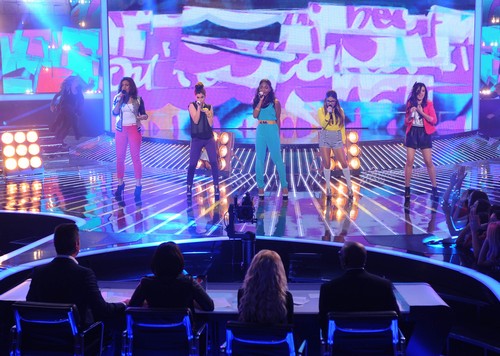 Fifth Harmony was eliminated during tonight’s FINALE of The X Factor USA.  They finish the season in third place.  If you missed the results show and want to see who WON the X Factor Season 2, we recapped it here for you!

On last night’s show Fifth Harmony – Mentored by Simon Cowell sang Anything Could Happen & Give Your Heart A Break & Let It Be – Fifth Harmony is one of the best groups in X-Factor’s history. They’ve been able to carve out a group act niche in a very short amount of time. Fortunately, this is not the end of Fifth Harmony. If Simon Cowell has any business sense – and he does – he will make Fifth Harmony the US version of One Direction. They have a massive fan bloc, especially in the teenage demographic, so a record deal would be the best decision for this group in the end.

FINAL WORDS – If these girls are able to choose the correct songs in their post-X-Factor careers, they will be one of the biggest girl bands on the planet. They have amazing potential and great vocal ability. Unfortunately, Cowell lost the plot with song choices during the competition and made Fifth Harmony a contrived and disjointed group. They have a future; in fact, they are the future of modern pop music.