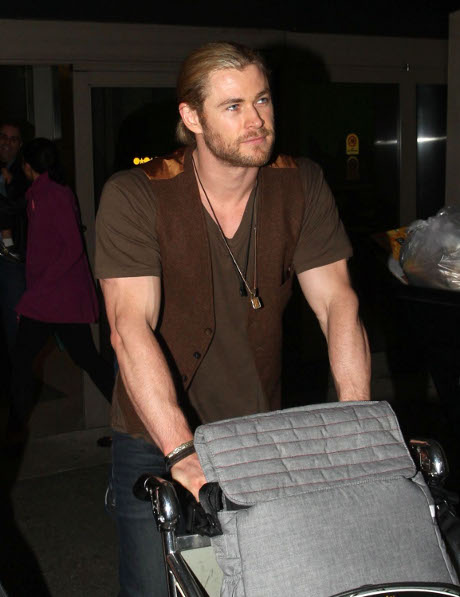 In a pool of potentials that include Ian Somerhalder, Ryan Gosling, Matt Bomer, and many others, fans of the book are throwing Chris Hemsworth in as yet another potential to play the part of the crazy-sexual Christian Grey. It’s hard to say if he’d be good in the role. With the Thor movies under his belt, and the Avengers movie having done so fantastically at the box office, Hemsworth has become known for playing the burly-superhero-save-the-world type of character — something that Christian Grey definitely is not. And, apparently, after a few private readers, he seems quite shy around BDSM content *hehehe* and his readings were a bit unconvincing.

Chris Hemsworth could probably pull out the necessary acting abilities to create a convincing sexual deviant, but I think they could probably find better. Just as much speculation has gone into who will play the female lead, Anastasia Steele. The same amount of care needs to go into finding who will play that part as well, being that she is not only Grey’s sexual interest but the primary voice of the story.

Personally, I think they should find actors who have not fully established themselves in Hollywood yet. I find that with book-to-screen adaptions, discovering new faces can do a lot for the author’s creations, as well as the future brand. You also have to put yourself in the actor or actress’s shoes: Will they forever want to be referred to as and linked to either Christian Grey or Anastasia Steele. Chances are the film franchise will be a booming success. But, if it’s not, that reputation will follow them throughout their career.

Check out all our Fifty Shades of Grey stuff by clicking here!