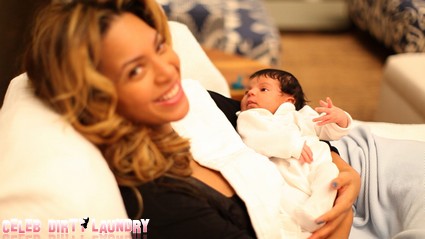 Welcome to the world Blue Ivy Carter. The most famous baby on the planet has made her first public appearance at four weeks old. A very proud Beyonce and Jay Z have released the first pictures of their bundle of joy – and as expected she’s absolutely gorgeous!

The superstar couple chose not to show off their little girl in a flashy magazine spread. They opted for social media. The five pictures were uploaded to Tumblr with a note to their fans about their darling newborn ‘We welcome you to share our joy. Thank you for respecting our privacy during this beautiful time in our lives.’ Awww

So now we know what former band mate Kelly Rowland and actress and good friend Gwyenth Paltrow were gushing about – Blue Ivy really is an adorable little girl. She has an amazing crop of dark hair. Looking at these shots I’d say she’s taking after her Daddy a bit more at this stage. I can definitely see some Jay Z in Blue Ivy!

It’s been a big week for the Carters. We got our first glimpse of Beyonce since giving birth. The new Mom looked stunning in a figure hugging dress for a night out on the town. She even had blue nail polish as a nod to her new daughter. And now we get to see the girl who’s turned internet on its head. Her birth dominated the twitter sphere for days – now her first pictures are doing the same.

So enjoy the gallery featuring Blue Ivy Carter. We get to see her with Mom and Dad. Blue on her own and a touching snap of her reaching out for her famous Mom’s hand.