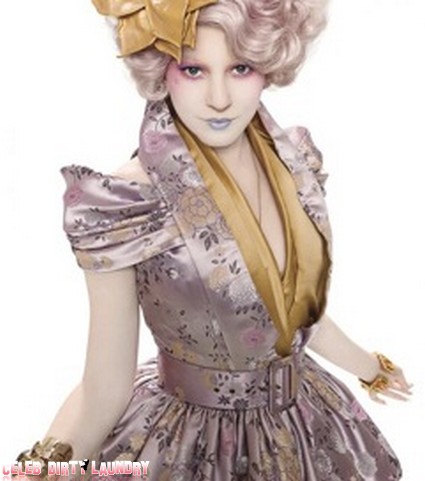 As if Lionsgate needed to add more buzz to their much anticipated film adaptation of Suzanne Collins “The Hunger Games,” the company has just released a promo photo of Elizabeth Banks in her role as Effie Trinket.

Looking very much like she stepped out of a Gwen Stefani music video, Banks is virtually indiscernible under the powdered pompadour, purple makeup, and silk dress.

In conversation with The HuffingtonPost, Banks reacted to the intense costuming, admitting that “a fun part of being an actor and a chameleon is taking on those looks.” Of her “Hunger Games” character, she added, “Effie has a really theatrical, over-the-top, completely not me look to her. I’m very excited for people to see my portrayal. I have no idea if people are going to be into it. I hope they are.”

In the popular young adult saga, Effie Trinket is an advisor to District 12 tributes Katniss Everdeen (Jennifer Lawrence) and Peeta Mellark (Josh Hutcherson). She draws the names of the Hunger Games tributes and escorts them to the capital and is known for her awkwardly bubbly personality. Word has it that her role has been beefed up for the film version of the book.

“The Hunger Games,” which is due for release on March 23rd, has been generating massive hype amongst fans of the best selling books since word of its production. On whether she is worrying about fans reactions to the movie or her performance, Banks says she can’t. “I really don’t want people to be disappointed — I’m a fan of the books myself, so of course I just want to be faithful and do right by her.” She said, “But I loved Effie. I loved playing it, I loved how it came out, I’m really proud of it, so any of the haters, I’m just going to ignore.”

Though the film has some parents fretting over the violent content, Banks told the HuffingtonPost that she preferred to focus on the optimistic message of the story:  “To me the message of ‘The Hunger Games’ is that revolution can come from one person, an act of kindness by one person. I think it’s really important to tell kids that they matter, that individuals matter, and that everyone counts, and that to me is the message of “The Hunger Games.”

Sounds to me like Effie’s positive outlook rubbed off on Banks a little!