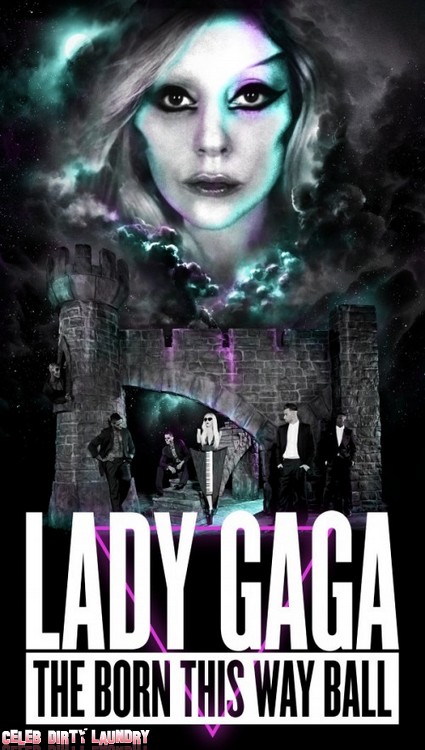 Lady Gaga obviously says to herself – anything Madonna can do, I can do better. So it’s no surprise to see her announcing a World Tour within days of the Material Girl. 2012 is going to be the the Born This Way Ball versus MDNA. Bring it on!

In true Gaga fashion the tour poster is already making headlines and drawing criticism. It was unveiled last night on Twitter by the woman herself. She tweeted something about having too much wine and wanting to give her fans a sneak peek at what she was working on. As expected her little Monsters went into cyber meltdown. The Born This Way Ball was trending worldwide just minutes later.

So what about the poster? One word sums it up for me – freaky! An android inspired Gaga is looming God-like over a castle. It looks very Rocky Horror Picture Show. It’s also pretty dark and moody – a lot like the Queen of shock herself. And who’s that peering out of the castle window? One of Madonna’s spies?

The tour dates will be released later today. As we reported on Celeb Dirty Laundry last month Mother monster wants to stage the biggest tour the World has ever seen. She wants to break U2’s record and is willing to go on the road for two years to do it. She’ll drag her freaky self across the globe and back again in her quest for world domination. Like I said, if Madonna can do it – so can she. Let the battle begin!