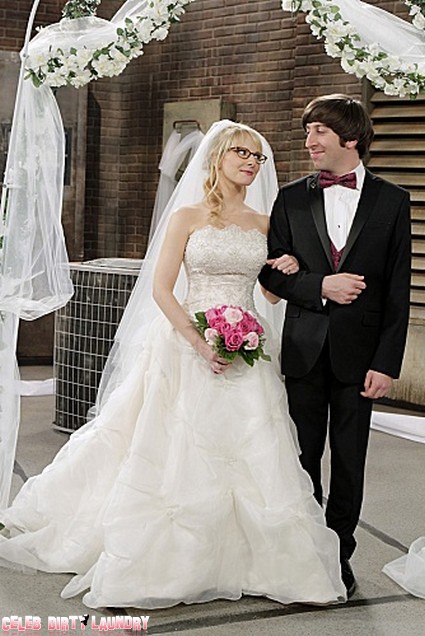 Wedding bells are ringing on The Big Bang Theory. Season five will wrap up next month with Howard (Simon Helberg) and Bernadette (Melissa Rauch) finally saying ‘I Do‘. We have your first look at the bride and groom on their big day. Howard actually looks kind of handsome, kind of…

Of course nothing goes to plan – this is a TV wedding after all! The episode is called ‘The Countdown Reflection‘. The wedding plans are thrown into disarray when the launch date for Howard’s space flight is moved forward. That means the nuptials have to be brought forward as well. So Sheldon (Jim Parsons), Leonard (Johnny Galecki), Penny (Kaley Cuoco) and the gang pitch in to help the couple in their hour of need. The episode is the season five closer and will air on May 10 on CBS.

Executive Producer Steve Molaro says ‘the last scene of the last episode of season five is amazing. everybody is involved in the scene and it is really great‘. He reckons fans will get a little ‘choked up‘ when they watch it. Maybe the nuptials even move Sheldon to tears? As a huge Big Bang fan I can’t wait to see the Wolowitz wedding.

It’s been a big season for the show. Great ratings coupled with some amazing guests like Scientist Stephen Hawking and Spock himself Leonard Nimoy. After the May 10 finale the cast will be on hiatus until August. The writers will be back at work  in June. Filming on season six starts two months later.