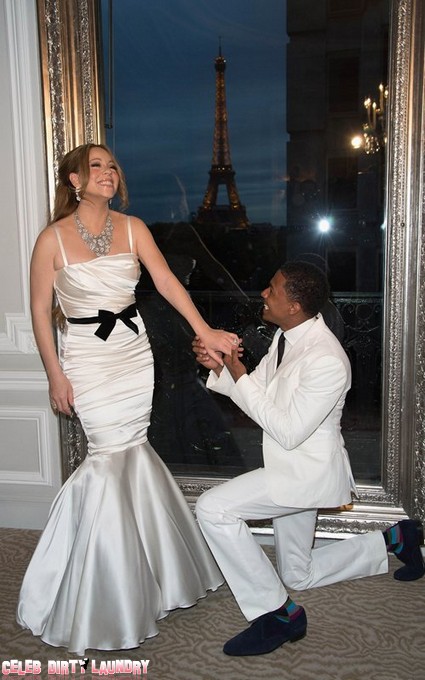 What is it with celebrities continually renewing their marriage vows? Weren’t they sure the first time? Mariah Carey and Nick Cannon are becoming serial offenders. They’ve just said ‘I Do‘  for the third time in four years!

The 42 year old singer and her 31 year old toyboy opted to renew their vows in the City of Love this time. Spokeswoman Cindi Berger says they held an ‘intimate ceremony after a romantic dinner at the beautiful Jules Verne restaurant‘ at the Eiffel Tower in Paris. Yes it was so intimate they released these pictures for all the world to see!

Mariah was chaneling her inner mermaid with a silky fish tail gown and plenty of bling. She was also wrapped up in a black bow – she looked like a present for her husband! Nick was color coordinated in a white suit with funky socks and blue suede shoes. There was no sign of their twins Moroccan and Monroe. The pair kicked up their heels after the formalities and were last seen heading out for a night on the town.

The renewal of their vows comes after a trying time for the family. Nick was hospitalized in January with kidney problems. He even resigned from his job to focus on his recovery. But I have a word of warning for couples like Mariah and Nick who flaunt their love with these tacky ceremonies. Remember Heidi Klum and Seal? They renewed their vows every year without fail – until their marriage ended earlier this year!