First Man on the Moon Neil Armstrong Dies at Age 82 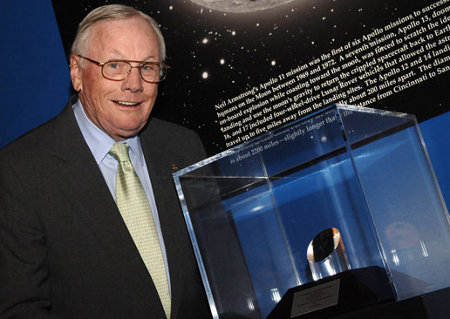 The first man to ever set foot on the moon, Neil Armstrong, has died at the age of 82. Just a few days before his birthday earlier this month, Neil underwent heart surgery. He led a long, fulfilling life and his accomplishments will never be forgotten.

TMZ broke the news just a few minutes ago, saying, “Neil Armstrong, the first man to walk on the moon, has died today. He was 82. Armstrong underwent heart surgery earlier this month, just a few days after his birthday.”

Armstrong was the space pioneer behind the Apollo 11, which successfully landed on the moon in 1959. He made leaps and bounds for the world of science, especially NASA, and is probably most famous for the lines he radioed back from the moon during his 3-hour-long space adventure. “That’s one small step for man, one giant leap for mankind,” he said in, perhaps now, one of the most famous and recognizable quotes of all time.

TMZ reports that he largely stayed out of the Hollywood limelight over the past few years, instead choosing to spend a quiet life with his wife Carol, whom he married back in 1999. The world will forever remember Neil and the steps he took.