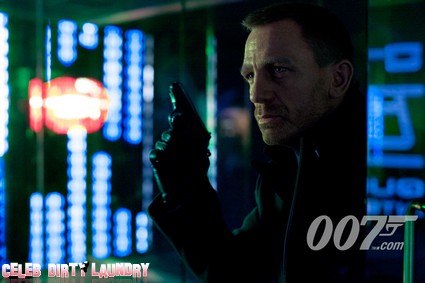 One of the big movies we have to look forward to this year is the latest James Bond installment Skyfall. It’s still eight months away but the first official picture of Daniel Craig from the new 007 adventure has been released to whet our appetite – and it’s working!

There’s some facial hair and Craig looks a bit older but apart from that it’s business as usual for our favorite spy. It’s his third outing in the iconic role. He made his debut in Casino Royale in 2006. Then came Quantum of Solace in 2008. We’ve had to wait a bit longer for this Bond movie but I’m sure it’ll be worth it.

So what do we know about Skyfall – the 23rd movie in the popular series… Apparently we’ll see the spy’s loyalty to M tested when a figure from her past emerges. When MI6 is attacked it falls to Mr. Bond to seek out and eliminate the threat regardless of the cost. We’ll also see the death of a few MI6 agents along the way. Funeral scenes were shot in London late last year.

Of course Bond can’t save the world and battle the bad guys on his own. The movie also stars Judi Dench, Ralph Fiennes and Javier Bardem. Daniel, Ralph and Javier – that’s more than enough eye candy to get the girls into theaters as well! And what about the all important Bond girls? We’ve had beauties like Halle Berry, Ursula Andress and Teri Hatcher. This time around they’re being referred to as Bond Ladies ( has 007 finally succumbed to political correctness?) and they are little known actresses Naomie Harris and Bérénice Marloh.