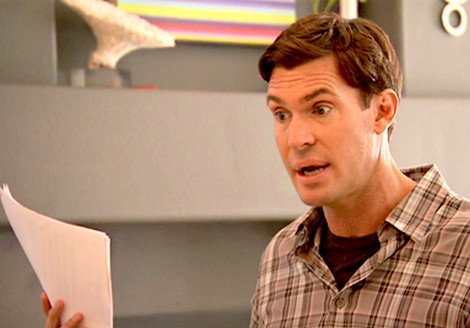 The exciting designer series Flipping Out returns for its 6th season following well-known house flipper and interior designer, Jeff Lewis! Celeb Dirty Laundry will be covering the premiere with all the up-to-the-minute details, so don’t forget to come by for our full and detailed recap.

If you have never watched Flipping Out is about demanding designer Jeff Lewis and his ever changing, yet always entertaining, staff at Jeff Lewis Designs. In the new season Jeff’s business continues to be more centered on interior design than house flipping, but he still manages to turn the lives of everyone around him upside down.

As Jeff wrestles with a growing business, new staff members, a slate of crazy clients and a renovation of his own, his life is becoming a mess so big not even his faithful maid, Zoila, can clean it up!

Season 6 finds Jeff and his trusty assistant and sidekick, Jenni Pulos, busier than ever in both their business and personal lives. Jeff and his partner, Gage Edward, have purchased a home with the intention of settling down and starting a family. Their dream home on Gramercy begins to turn into a nightmare, however, when costs and delays on a massive renovation of the property begin to put a strain on their relationship.

Tonight is going to be a fun episode of Flipping Out that you won’t want to miss, so be sure to tune in for our live coverage of Bravo’s season premiere of “Flipping Out” tonight at 9PM EST! Meanwhile, while you wait for our recap hit the comments and let us know if you are excited about the season 6 premiere of “Flipping Out!” Check out the sneak peek video of tonight’s show below!

Tonight’s episode:  The new season of Flipping Out begins with numerous changes. Jenni is back full time kind of as Jeff’s right hand girl, taking care of his schedule and assisting him with various jobs. She is also newly engaged and he tries in vain to figure out (during a car ride with Jenni) just how many gifts he must buy for a woman that is marrying for the second time.  Jeff is thrilled to find that a home he owned and flipped five years ago was back on the market. “the gramercy” seems to be his baby and Jenni predicts that ultimately this property will become Jeff’s home base.

Zoila is Jeff’s housekeeper and she is in desperate need of a vacuum cleaner and this conversation launches into Jeff gloating over the maid system of checks and balances that he has set up. Zoila had plastic surgery and while she healed Jeff had brought in Lupe who did a fabulous job. He thinks keeping her on two days a week keeps the pressure on Zoila.

Jeff is really great at using people to his advantage. He pushes a worker named Andrew really hard because he learned that Andrew has a trust fund with a really big string attached. He only gets his monthly pay out if he is gainfully employed which means, Andrew needs Jeff. Jeff seems to relish pulling the strings in the lives of those around him.

Jeff is clearly completely fixated on renovating Gramercy. He’s also stressing over his relationship with Gage. The two work closely within his design business all day and then have a tricky time separating things after hours when it’s time for a personal life.

Andrew is on site when a house that they are working on, Spring Oak, springs a leak. Andrew calls Jeff in a panic and tells him that everything is flooded. Once Jeff arrives his fears are confirmed, Andrew is a nervous drama queen. The water problem wasn’t nearly as bad he was led to believe. He thinks Andrew always appears to be on the verge of a nervous breakdown and this new hire may not be part of his team for very long.

The owners of Spring Oak finally arrive to see the progress on their home and they are thrilled beyond words. Andrew has managed to step up and overcome his jangled nerves in order to get the job done. The couple loves the floor that is no longer flooded and praised Jeff’s design team.

Gage is very serious and maybe that’s what makes him a good partner for Jeff, in all ways. Jeff likes to work with people that keep him entertained (like Andrew), but the work doesn’t necessarily get done that way so Gage attempts to keep everyone on track and in check.

Speaking of entertaining, Jenni’s engagement party is also shown on this episode. She and Jonathan are getting married but their relationship is long-distance and he seems to even have a hard time showing up for their party! Eventually Jenni’s love arrives and she introduces the Greek doctor to everyone in attendance. Jeff makes fun of her terribly but concedes that they really do make a great couple and he’s happy for her.

Jeff calls Gage and schedules a lunch meeting. He believes that Gramercy is putting too much stress on them as a couple and so he wants to figure out an exit strategy. He suggests buying a property known as Spring Oak but Gage is still very attached to Gramercy. He doesn’t seem nearly as ready to let it go and this is a fight that is clearly going to escalate in the next episode!