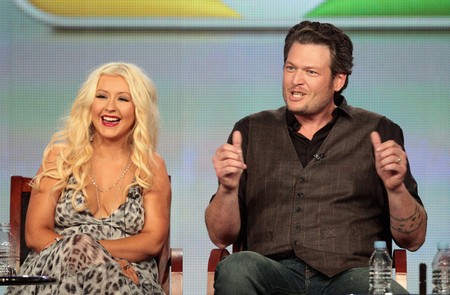 The Voice’s Christina Aguilera is moving in on co-star Blake Shelton as if he were a single man.  The flirting has gotten so intense that Blake’s wife, Miranda Lambert, is allegedly complaining and feels that she has to step in before she loses Blake.  It seems the The Voice coaches love to party, even on the set, and Blake and Christina are having a high old time partying and flirting – so much so that they are starting to raise eyebrows.

To make matters worse, Christina has begun to drop those extra pounds she packed on and is looking HOT… but since Miranda married Blake she has started to pack on the weight and looks rather matronly these days.  Of course this only adds to Miranda’s jealousy.

Blake is desperately trying to smooth things over with Miranda before the situation gets out of hand.  After all, Miranda is his wife and can be one tough cookie.  As we reported here on Celeb Dirty Laundry, Miranda went so far as to threaten Chris Brown’s life during a series of live performances because she didn’t approve of his treatment of Rihanna.

From The Star Print Edition: “Christina is constantly coming on to Blake, and he just eats up the attention she’s lavishing on him.  It doesn’t help that they drink together on set. They slip into each other’s dressing rooms and lock the door behind them. Then they’ll come out an hour later, all giggly and touchy-feely.  There are a lot of whispers going around on set about their relationship and Miranda thinks they’re getting way too close for comfort. She’s steaming mad!”

“Miranda knows he’s had a crush on Christina since her ‘Dirty’ days even to the point where he once joked that she would be his choice as ‘free pass’ if he could hook up with her.  I don’t think that bothered Miranda back then, but now she’s definitely uncomfortable with the thought of them working together so closely.”

If Christina wants to avoid more trouble than she can handle then she better steer clear of Blake.  We don’t want to see a shotgun-toting Miranda tracking down Christina next time we watch The Voice!