Fran Drescher And Her Gay Ex-Husband Were Abducted By Aliens 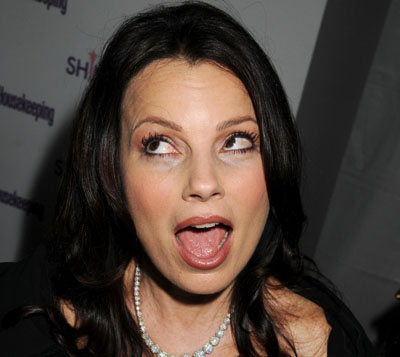 Following the news that the 54-year-old former TV star’s ex-husband of 18 years, Peter Marc Jacobson, came out of the closet while they were still married to each other, The Nanny actress is now claiming that the two were both abducted by extraterrestrials when they were kids and have “chips” implanted in their bodies!

“You know, it’s funny because Peter and I both saw [aliens] before we knew each other, doing the same thing, driving on the road with our dads,” Fran told the Huffington Post. “We were both in junior high. A few years later, we met, and we realized that we had the same experience. I think that somehow we were programmed to meet. We both have this scar. It’s the exact same scar on the exact same spot.”

However, it seems that Peter is not so convinced that their scars are the result of a UFO encounter.

“I said to him, that’s what the aliens programmed us to think,” Fran explains. “But really, that’s where the chip is.“

And while the actress’ last TV show, Happily Divorced, which was loosely based on her own marriage to Peter and his realization that he was gay, was cancelled after 10 episodes, we won’t be surprised if Fran decides to turn this part of her life into a TV series too. Happily Abducted, anyone?