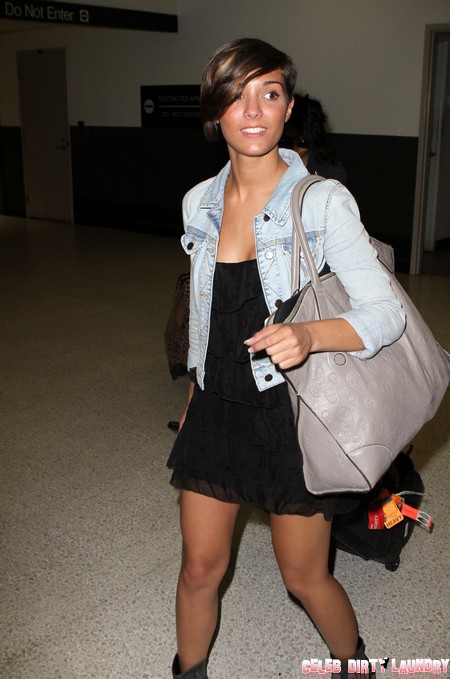 Frankie is grateful! Frankie Sandford, 23, who sings with that sexy English band, The Saturdays whose songs include “30 days” and “All Fired Up”, is out and about these days.  She has a new short haircut and she is looking sassy and healthy.  This poor bobocita has been thru the mill this year, but to you give a little back story on her.

She first started out at the age of 12 with the pop band S Club 8, but I guess success is a doubled edged sword.  She has been quoted as saying, “I felt that I was worthless and ugly and did not deserve anything.”  Can you image that as talented as she is.  She also was quoted as saying, “I thought people would think, what has she got to be depressed about”.  She and her boyfriend Wayne Bridge, an English footballer who plays as a left back for Football League Championship, could not figure out what was wrong with her.  Eventually they did find out that she was suffering from depression.  She talked with her band mates who encouraged and supported her decision to go into rehab.

Frankie attributes her getting well from all the love and support she received from Wayne, Awww…..A picture was tweeted early this morning showing her with a huge bouquet of flowers at the event she attended last night to raise money for people with mental health problems.

This is very mature moves that this chica made because there are a lot of people, celebrities included and I can name a few but will not, that have mental health problems and do not seek help in fear of a backlash.  Now our little chica is not feeling so hot this morning because she tweeted very early, “sicky sue today”.  Alright you hope you feel better and keep singing.