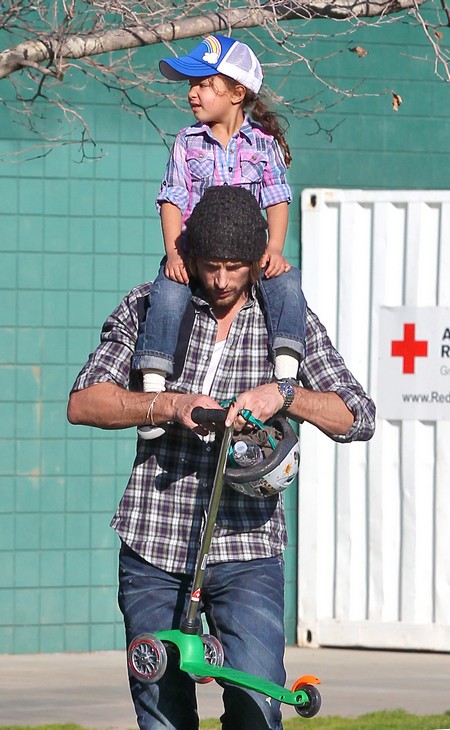 Turns out that Gabriel Aubry is one crazy dude. A fight reportedly broke out at Halle Berry‘s house, and it involved both Gabriel and Olivier Martinez. It wasn’t a little fight either. The fight was quite brutal and Olivier completely knocked out Gabriel, who was later taken to the hospital. Gabriel allegedly started the fight, according to several witnesses. I think it’s safe to say that Olivier, who was not sent to the hospital, won the battle — which was certainly instigated by Mr. Aubry.

Apparently, Gabriel was dropping his daughter Nahla off at Halle’s house when, after seeing Olivier, he went completely nutso.

TMZ exclusively reports, “Gabriel Aubry was arrested after a huge fight broke out at Halle Berry’s involving Gabriel and Olivier Martinez — both men were injured, Gabriel is in the hospital and was arrested for battery … law enforcement sources tell TMZ. The incident happened this morning when Gabriel was dropping Nahla off at Halle’s house. Halle was present as were other witnesses when the fight erupted. Sources familiar with the situation tell TMZ … “Gabriel went nuts” and started fighting Olivier.”

Olivier, while not hospitalized, did suffer injuries . . . and he’s likely to press charges. Since the fight broke out, law enforcement officials are supposedly going to cite and release Gabriel from the hospital; however, this little situation isn’t over yet. Halle will most definitely get a protective order against Aubry, outlining conditions that will bar him from coming in contact with her, Olivier, and probably Nahla.

What do you think about Gabriel’s nutso assault? Gabriel Aubry fights Olivier Martinez: crazy or inevitable?

TMZ updates the story: “TMZ has learned a judge has issued an emergency protective order which requires Gabriel to stay 100 yards away from Halle, Olivier, and Nahla. We’ve also learned the nature of Gabriel’s injuries — a broken rib and contusions on the face. And further, we know Olivier is currently at the same hospital as Gabriel for treatment of a possibly broken hand as well as neck injuries.”

Apparently, the words that started the fight were: “We have to move on.” To get the full update, including how the fight went down, check out TMZ. Also, the exact details seem a bit sketchy, since both parties were chatting in French.