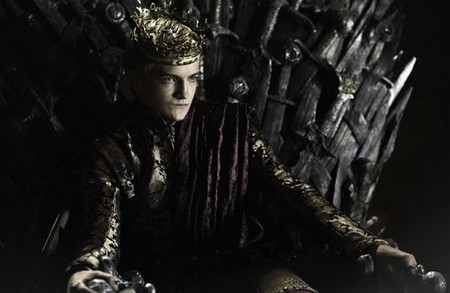 The Game of Thrones is finally back tonight on HBO with the season premiere.  When the show ended last season we were left wondering what happened to some of our favorite characters and their quest for the Iron Throne.  Tonight we will get to see what happened to our favorite characters in the most highly anticipated HBO premiere.  My one wish this season is that Joffrey will get his – power has gone straight to his head and I absolutely despised him in Season 1.  What do you think of Joffrey?  Sound out in the comments below!

On tonight’s show as Robb Stark and his northern army continue the war against the Lannisters, Tyrion arrives in King’s Landing to counsel Joffrey and temper the young king’s excesses. On the island of Dragonstone, Stannis Baratheon plots an invasion to claim his late brother’s throne, allying himself with the fiery Melisandre, a strange priestess of a stranger god.

Across the sea, Daenerys, her three young dragons and khalasar trek through the Red Waste in search of allies, or water. In the North, Bran presides over a threadbare Winterfell, while beyond the Wall, Jon Snow and the Night’s Watch must shelter with a devious wildling.

We will be live blogging the episode with all the up-to-the-minute details at 9PM EST so make sure to come back to this spot and watch the show with us.   Make sure to refresh often so you get the most current info!  While you wait for the episode you can catch a sneak peek of tonight’s episode HERE!

TONIGHT’S RECAP: Welcome to our recap of Game of Thrones, tonight’s show opens with the Seven Kingdoms at war, with the King in the North Robb Stark fighting to win independence for his people and those of the Riverlands.

We open with it being Joffrey’s name day and how appropriate it starts with a death.  As usual he is being despicable in the celebrations of his day as Sansa sits by his side.

Two more men come to fight to be knights and Joffrey feels that one of the fighters has been drinking and Joffrey offers him more to drink and then tells the soldier to see that he has drunk his fill.  They put a funnel in the man’s mouth and from a barrel starts pouring wine down his month.  Sansa is terrified and tells Jofffrey he cannot do it and it is bad luck to kill someone on his name day.  Sansa tells Joffrey he is better off  to make the fighter her fool rather than his knight – he does not deserve a quick death.  She is just trying to trick  Joffrey and it works.

Joffrey’s uncle Tyrion Lannister walks in makes a sarcastic comment to Joffrey ‘We looked for you on the battle field and did not see you.’ Tyrion is back in Kings Landing. He congratulates Joffrey for his beautiful lady Sansa.  Tyrion gives his condolences to Sansa on the death of her father. Joffrey the creep says her father was not a loss he was a trailtor.  Sansa agrees and says her father was a traitor and so was her mother and her brothers.

Tyrion Lannister tells him Joffrey he wishes he could stay but there is work to do.  “What work? Why are you here?” asks Joffrey.

At the small council, Grand Maester tells the Queen that summer is officially over. He tells her the people will starve there is not enough wheat and she tells him to lock them outside the gate – that is where they belong. Tyrion crashes the small council meeting  much to his sister Cersei’s dismay.  She asks what he is doing there and he lets her know he is stepping in for hand of the king.  He tells her she did nothing when they beheaded Ned Stark and everyone is up in arms and they are losing the war because of it.  He also tells her she’s lost Ayria and lets her know Ayria is a much better bargaining chip than Sansa and her father will be furious.  He suggests trading the two Stark children for Jaime.

Since Bran is the oldest Stark left in Winterfell, he’s now the lord in charge of all the decisions. The peasants are meeting with their Lord and they are telling Bran how nothing will last – there is no maintenance.  He tells them that that they have taken all his men to fight.  They give him masons for a week to repair his walls and asks if that is sufficient.  Bran looks bored.

Daeberys Targaryen, the Khaleesi and her baby dragons are walking with her band of khalasars and a girls asks what his brother said about the dragon – she tells her he said they eat meat but he knew nothing else.  As they are walking her favorite horse falls to the ground.  As they walk through the red waste she asks if it will ever end.  He tells her that if they do not go this way they will kill her dragons she tells him no one will kill her dragons.  Right now her dragons are vulnerable.  She tells them to find how long the red waste goes on and what is beyond.  She tells her brother he is her last hope, he has never let her down.  They must cross the wasteland and find new allies to support her claim for the iron throne.

In the distant North, the night watch has mounted an expedition beyond the Wall.    One of them sees a girl and they have no seen girls in 6 months.  It is the owner  former member of the Night’s Watch Craster’s daughters – but wait they are told he marries his daughter and makes new daughters.  Craster tells Jon Snow he is prettier than his daughter – very true!  He tells the night watch if he catches anyone talking to his daughters…..

Craster has no idea where Benjen is, but he does let us know that the wildlings north of the Wall have joined forces in support of a new king, Mance Rayder.

At Dragonstone King Stannis has decided that a new god and creepy red headed  priestess named Melisandre  are the people he wants backing him. His good friend Davos is not amused.

They are burning all the false gods and idols.  Melisandre tells everyone that in the ancient books it says a warrior will take a sword from the burning fire.  Melisandre goes up to Stannis and says Stannis warrior of light your sword awaits you.  Stannis goes to the fire and pulls a burning sword out.  Everyone drops to their knees.

Stannis Baratheon launches his campaign to take the Iron Throne and commissions a memo about Jaime Lannister being Joffrey’s biological father and sends it to everyone.

Robb Stark is dragging Jamie Lannister from camp to camp and has him in a cage and threatens him with a big wolf.  He asks if he trusts the men following him – he tells him he trusts the men will be loyal to him just Jamie the King killer.  Robb tells Jamie that Joffrey is Jamie’s son and Stannis is the true King.  Stark is sending a cousin of Joffrey to to negotiate.  Jamie tells him 3 victories do not make him a conqueror.

Catelyn Stark is not very happy when Robb tells her he wants to enlist Theon’s help and get the Greyjoys on the Stark side.  He needs ships.  She wants to go home but he needs her to form an alliance with Renly Baratheon and his 100,000-man army.  If Rely sides with them they will outnumber them 2 – 1.  Then they will get the girls back and go home for good.  She agrees to ride at first light.  He tells her they will all be together again soon.  She tells him he has done so well his father would be proud of him.  He tells her to give King Renly his regards.  And she says King Renly there is a King in every corner now.

Joffrey’s mother Cersei comes in and asks Joffrey what he is doing he tells her he is putting the room in proper order.  She tells Joffrey they cannot find Ayria and they need her. She tells Joffrey they will never get Jamie back if they do not find her.  Joffrey tells his mother he heard a disgusting rumor about his mother and Jamie.  She tells him it is a lie.  He asks her if his father f*!k other women when he was tired of her and he insults his mother and asks how many bastard children Robert Baratheon had.  Cersei slaps him in the face (thank goodness I have wanted to do that for a long time) – he tells her what she just did is punishable by death and he tells her she will never do it again and dismisses her.

So what does Joffrey do about this?  He sends his men traveling across King’s Landing in search of Robert’s bastard children and executing them. That includes Janos Slynt and the Goldcloaks going to a brother and taking a crying infant from its mother’s breast and killing it. ughh I hate him!  All over King’s Landing, black-haired bastards are being murdered.

Arya and Gendry are travelling together and the last thing we see is the old blacksmith giving up the fact that Gendry (Robert’s bastard son) is on his way to the Night’s Watch.