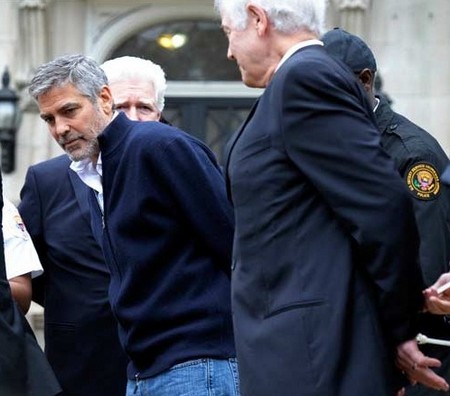 George Clooney has been arrested in Washington D.C. and dragged away by the Secret Service!  It seems Mr. Clooney was involved in a protest against the terrible war crimes being committed in Sudan.  George was in good company as he was carted off as congressmen were amongst the dozen people arrested.  George was demanding that humanitarian aid be allowed into the beleaguered nation.

TMZ has exclusive details:  George Clooney has been arrested in Washington, D.C. during a protest over the Sudan crisis.  Clooney was leading a protest in front of the Sudanese embassy in D.C. when he was hauled away by secret service agents.

Clooney’s publicist Stan Rosenfield tells TMZ, “They were protesting the violence committed by the government of Sudan on its own innocent men, women and children. They were demanding they allow humanitarian aid into the country before it becomes the largest humanitarian crisis in the world.”

Sources connected with George tell us he feels good about the arrest because it puts the spotlight on the crisis.  We’re told a dozen people got arrested including congressmen, leaders of the human rights community, Sudanese citizens, and George’s father … Nick Clooney.

Clooney recently shot a short documentary about the situation in Sudan, which he released no EnoughProject.com. WARNING — Video contains VERY graphic content.

Good for George!  Stand up for what you believe!  Will we see George Clooney running for elected office soon?