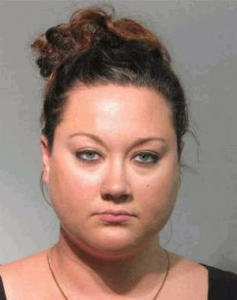 George Zimmerman’s wife Shellie Zimmerman was arrested after lying to a judge during a hearing that ended with her husband, Trayvon Martin’s shooter getting released on $150,000 bond! One thing you do not do is lie while under oath. Shame, shame, shame! Well, she did just that when she told the judge that she and her husband had next to no money. Shellie just forgot to disclose that they had raised at least $135,000 in a PayPal account that they used towards his bail. Girlfriend is now paying the price and will be charged for perjury, which is a third-degree felony!

According to the Huffington Post, Shellie was arrested and released on $1,000 bond.

In other words, they knew what they were doing!

Trayvon Martin’s family attorney Benjamin Crump released a statment on the arrest of George Zimmerman’s wife, “The prosecutor sent a strong message that you have to tell the truth in court because it is the whole bases of the American legal system. Credibility of every witness is always at the crux of every legal case.”

And now, George turned himself back into after jail Circuit Judge Kenneth Lester revoked his bond.

Get this, now BOTH Zimmermans are in jail…and the same one John E. Polk Correctional.

Zimmerman’s second bond hearing is set for June 29 in Sanford.