Gerard Butler Opens Up About Close Call With Death 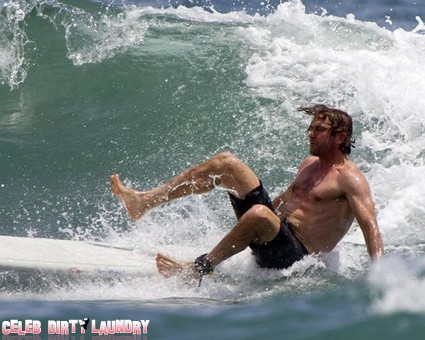 It was ‘a close call’ – that’s how actor Gerard Butler is describing a recent surfing accident that landed him in hospital. The daredevil was filming a stunt for a new movie last month when the waves in Northern California decided they didn’t want to play nice. He’s opened up about the incident for the first time.

He says stories that he was lucky to be alive were on the money ‘This was maybe one of the few times that the reports were not exaggerated.’ The admission was made on the Graham Norton Show which will screen in the UK this weekend. He says the waves ‘just took me and I couldn’t get up.’ Scary stuff indeed!

Butler was the victim of a ‘two-wave hold-down’. A surfer is held down by one wave while another washes over them. What makes the close call even scarier…a professional surfer drowned at the same location less than a year before Butler’s slam dunk. So did the experience make the 42 year old think twice about grabbing a board and hitting the water? Not likely. ‘I was going to go back that day. I was actually in the ambulance and wanted to go back, which was a little crazy, but it’s pretty addictive.‘

The Scottish actor was working on the movie  Of Men and Mavericks when disaster struck. But he reckons it will make his portrayal of surfer Jay Moriarty in the new biopic all the more credible. Moriarty died in a free diving accident in 2001.