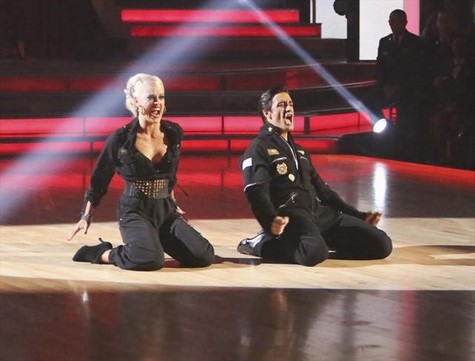 Gilles Marini and Peta Murgatroyd were eliminated during tonight’s elimination episode on Dancing with the Stars All-Stars.

On last night’s show Gilles Marini and Peta Murgatroyd danced the Quickstep – This previously front-running couple received brilliant critique and scores from the judges. Len called it “thunder and lightning”, Bruno said it was “fast and efficient”, and Carrie Ann saw “some wobbling, but it was good.” Len and Bruno scored the couple a perfect ten, while Carrie Ann scored them a near-perfect 9.5. Their first dance score was 29.5 – their highest score of the competition.

In their second dance of the night, the couple was joined by Chelsie Hightower for the Salsa. Len said it was “full on”, Bruno saw Giles “lose the timing a couple of times”, and Carrie Ann agreed with Bruno, but loved “how [Giles] took control of the dance floor.” Carrie Ann and Bruno scored them 9.5 points, while Len gave them a perfect score of 10 points. Giles and Peta’s GRAND TOTAL SCORE – 92.0 – the third lowest score for the two weeks of competition.