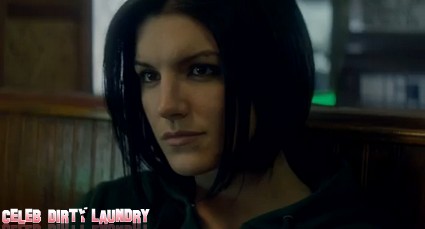 Gina Carano admits that she did have her voice altered for the movie ‘Haywire’ in which she plays Mallory Kane, a covert operative who is betrayed by her cohorts.

Gina appeared on a podcast for Eddie Goldman’s “No Holds Barred” MMA blog yesterday and explained why director Steven Soderbergh decided to play with her voice for the movie.

Gina says Soderbergh used the voice altering to help distinguish the real Gina from her character Mallory – establishing that they are “two completely different entities.”

Gina also said, “There was a little joke that I was saying that even if [Soderbergh] would have shaved my head and put Bill Clinton as my voice, I would have still done it.”

Gina has been looking for this big Hollywood break for years – and she deserves it. Gina has walked the walk of a true competitive professional MMA fighter – she is at least as legitimate as any male actor in Hollywood in terms of being a true professional athlete. Not that it’s a good thing but Gina has tested positive for anabolic steroids (after her Strikeforce fight on December 17, 2011).

I watched her fight the deadly Cris “Cyborg” Santos, when Gina was defeated back in August 2009 and I assure you that Gina has true grit. Santos is not just the toughest female fighter in the world, she is probably the world’s toughest fighter!

“Haywire” opens in theaters in the U.S. on January 20.