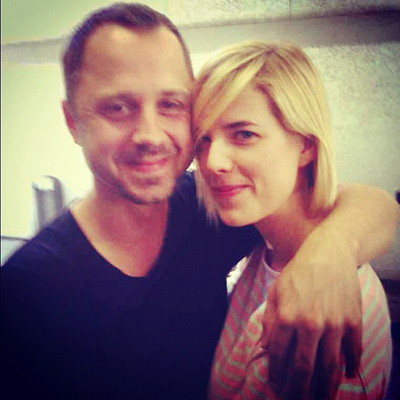 The gossip world was surprised when actor Giovanni Ribisi eloped with fashion model Agyness Deyn earlier this week. (Who even knew they were dating?) But no one was more surprised than Giovanni’s ex-girlfriend, British singer Cat Power, who claims that the 37-year-old dumped her out of the blue just two months before marrying Agyness, 29, in a secret wedding in Los Angeles.

Cat told the Daily Mail that the breakup “wasn’t really out of left-field, but it kinda was.” The couple had dated for three years, when Giovanni broke things off around April, just as Cat was finishing her latest album.

“The timing couldn’t have been more distracting, to say the least. It was down to the wire and [I was] really suffering, in the end. It hurts,” she said.

There’s no doubt that Giovanni and Agyness have had a whirl-wind romance, but considering that Giovanni was reportedly sharing a home with Cat and his 14-year-old daughter from a previous relationship at the time of their breakup, is it possible that he and Agyness started their relationship prior to his ending things with Cat? It does seem suspicious that the newlyweds could have become so serious in such a short amount of time.

Giovanni was spotted wearing a wedding ring at the premiere of his new movie, Ted but, not surprisingly, chose not to discuss his personal life. Related: Kristen Stewart & Robert Pattinson Have Secret Wedding In England

However, Agyness’ sister, Emily Deyn, took to Twitter to congratulate the pair:

“CATS OUT THE BAG!! Congrats to my sis @aggyd @aggydeyn & mi new bro inlaw Giovanni,” she wrote, adding the above photo.