Giuliana Rancic Talks About Her Life As A Mom 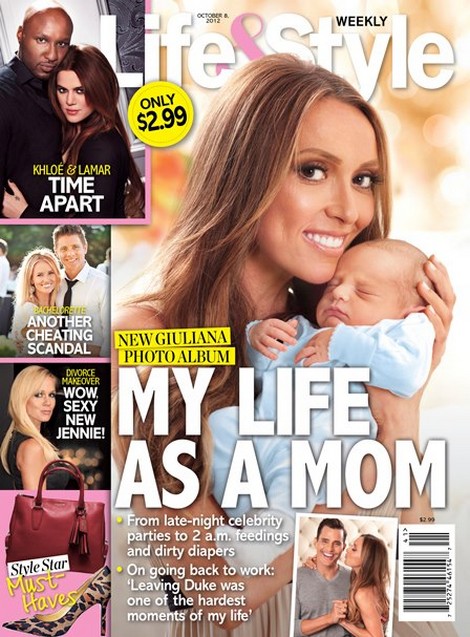 Giuliana and Bill Rancic have waited a long time to finally become parents and it’s pretty clear that when they welcomed Edward Duke on Aug. 29th life would never be the same. Giuliana has swapped late-nite celebrity parties for those 2 am feedings and diaper changes. According to the latest issue of Life & Style Magazine she has gone from perfectly groomed to sleep deprived and wouldn’t change a minute of it.  She tells the magazine,

“The hardest part of being a mom has been leaving Duke.  Being away from him is more difficult than I could have ever imagined. Saying goodbye, I started sobbing in Bill’s arms. I almost didn’t go.”

While the Rancic’s first four weeks of parenthood have left them completely blissful, other couples aren’t faring quite as well. Khloe Kardashian has been on a quest to get pregnant for a few years now and if you’ve seen any of the Kardashian related reality shows then you know it has taken a toll on her marriage to Lamar Odom. The couple is apparently spending some significant time apart now and you’ll need to read the article to find out if it’s work related, or if there’s trouble brewing for them.

Several weeks ago Emily Maynard and Jef Holm made news because he supposedly caught her sending dirty texts to another guy.  It looks like new rumors of infidelity are now surfacing and Life & Style has the details.

Have you caught a glimpse of Jennie Garth lately? After being dumped by hubby, Peter Facinelli last spring the mom of three has whipped herself into killer shape and has decided to totally flaunt it in the latest issue. Can you blame her?  Grab the latest Life & Style to catch up on all of these stories and more!