Giuliani and Bill Rancic Open Up About Their Miracle Baby (Video) 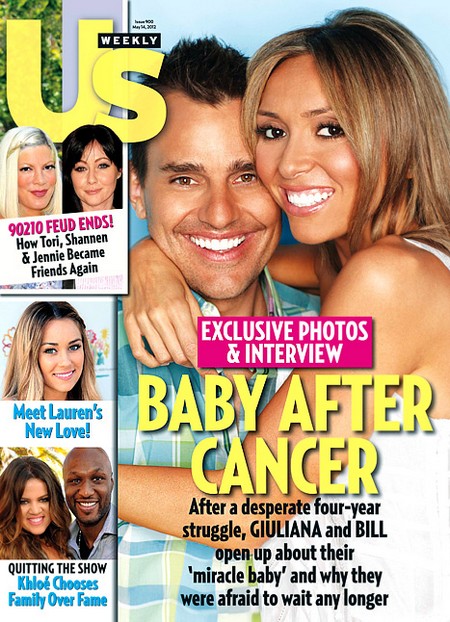 It’s official. Giuliani and Bill Rancic are 100% pregnant. We might already have heard the news but on last night’s Giuliani and Bill, the couple gave the world a sneak peak at the moment they viewed the first ultrasound of their baby at 7 weeks along.

The reality stars made the trip to Denver to visit their gestational carrier and Dr. William Schoolcraft and get an update on the pregnancy at the Colorado Center for Reproductive Medicine. And it wasn’t without some trepidation.

This week’s cover story on US Weekly tells us all about the pregnancy in a joint interview.  “It’s a little bit nerve-wracking because with IVF and with this type of a procedure, there’s always a chance that there was a false positive,” Bill explained.

But soon the nerves were soothed as Dr. Schoolcraft pointed out that what they were seeing on the monitor was, “the flickering of the cardiac activity of the heartbeat starting. That is just about the earliest gestational age where we can ever detect this.”

Over tears and smiles, the E! News host summed up the bittersweet moment.  “Looking at these first images, all these emotions from the past start rushing back,” Giuliani said. “All the struggles, the shots, all the doctor visits, the tears — just everything.”

It’s been a long road for the couple. Giuliani struggled through multiple failed rounds of IVF treatments and a miscarriage. Then she discovered she had breast cancer after undergoing a routine mammogram as part of her fertility treatments in September 2011, and had a double mastectomy in December 2011.

The self-proclaimed “baby mama” and “baby daddy” will become first time parents sometime in late summer and, in typical Rancic fashion, managed to add some much needed levity to the special moment.

“It’s so cute. It has a big head like me honey,” Giuliani said over giggles.“Hopefully not too big,” Bill deadpanned back.

Congrats again to the happy couple!